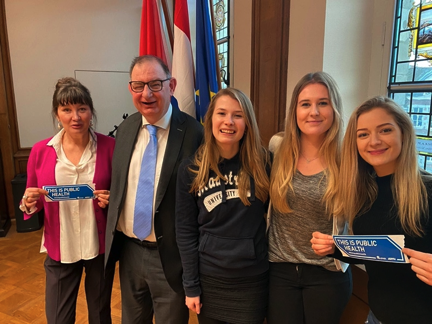 The Maastricht (Netherlands) TIPH campaign was represented by students in the MSc in Governance and Leadership in European Public Health programme at Maastricht University directed by dr Kasia Czabanowska, which is part of the Department of International Health at  the Faculty of Health, Medicine and Life Sciences (FHML).

The cohort consisted of approximately 50 motivated students from a diverse range of academic and cultural backgrounds. The TIPH campaign was endorsed by Professor dr Rianne Letschert, Rector Magnificus of Maastricht University and supported by School CAPHRI, Care and Public Health Research Institute and the Institute of Education, FHML. A number of local partners were involved in the campaign including: the Maastricht City Hall and various student organisations that endorsed and supported the campaign. The students and staff developed a Code of Professional Conduct to run the campaign and students who were actively involved in the core campaign team were acknowledged and rewarded for their participation with certificates provided by the university. 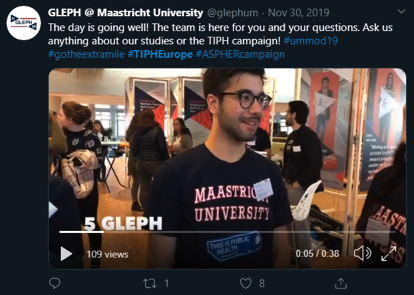 Figure: Student discussing what public health is at a university Open Days event.

The overarching aim of the Maastricht TIPH campaign was to increase awareness of the broad and multifaceted field of public health and the many different ways public health initiatives are being used to promote and protect the health and wellbeing of our community. To demonstrate the diversity of the field, the students chose to focus on campaign activities that highlighted six different areas of public health: nutrition, cross-border health, physical activity, mental health, healthy cities (infrastructure), and digital health. The target audience for this campaign included community members living in the Maastricht area, with a particular focus on the student community due to its size and ease of approachability, as well as the broader population in the Netherlands and beyond.

The creativity, ambition and knowledge of the students proved to be a perfect fit with their different academic and cultural backgrounds, which resulted in a variety of campaign outputs. These outputs fell into three main categories: social media engagement, attending university Open Days events, and creating educational videos, which are further detailed below. A central tool was also the use of blue ‘This is Public Health’ campaign stickers, which were placed on various health-promoting initiatives throughout the city to increase the visibility of public health in the local community.

Figure: Campaign stickers at an event to improve cycling safety by giving away free bike lights

Various activities and services in the community that serve public health goals were documented through photos, videos and educational captions that were shared widely on social media. These were shared on both university social media channels as well as the personal accounts of students in order to reach a larger and more diverse audience. 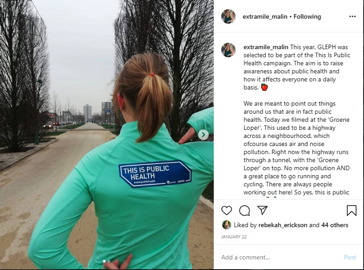 Figures: Social media posts: about the purpose of public health; to draw awareness to how designated green spaces and paths for running promote public health; and to how providing healthy food options promotes public health

Some examples of activities that were documented and shared online include: 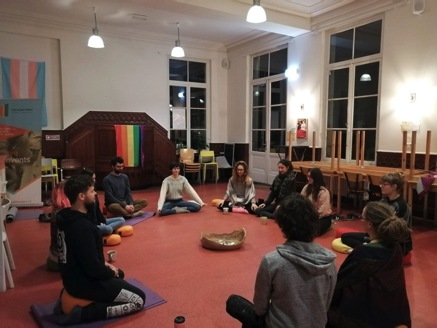 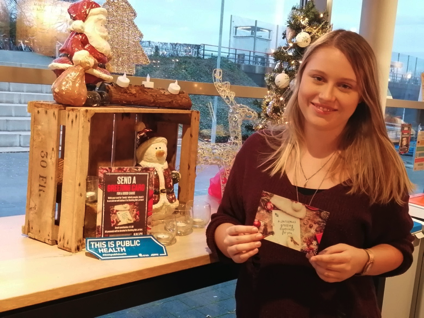 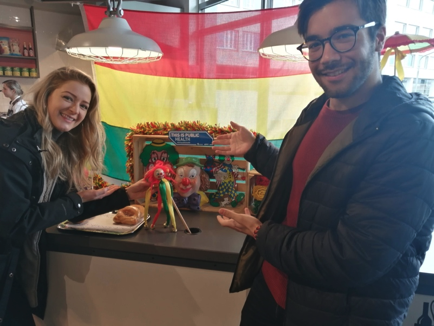 The university had scheduled three open days for prospective students in the same time span as the TIPH campaign. Unfortunately, due to the corona pandemic, only two took place. At these events, the students volunteered to spread the word of public health and its actions around the Faculty of Health, Medicine and Life Sciences. TIPH campaign stickers were also distributed to prospective students, who were encouraged to post on social media using the TIPH affiliated hashtags. Lastly, the campaign was also touched upon during the preview lectures of the MSc in Governance and Leadership in European Public Health. 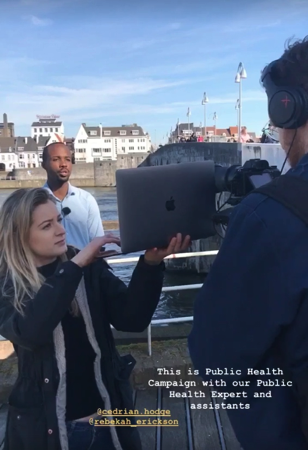 An educational film was created as an overarching final output of the campaign. This video aimed to explain what public health is, highlight the diversity of the field, and demonstrate its vital importance in our everyday lives. An additional Behind the Scenes video was also produced which highlighted the experiences of the students involved in the campaign and their reasons for pursuing public health as a career.In the educational video, the students are filmed partaking in various health-promoting activities and using public health services in the city (with TIPH campaign stickers attached) as well as conducting interviews with public health professionals, researchers and policy makers to highlight the diverse range of projects happening in Maastricht. Throughout the video, the students explain why these different initiatives are important for improving the health and wellbeing of the community and what public health entails as a profession.

Figures: A student getting familiarized with the filming equipment; Behind the scenes footage of filming. 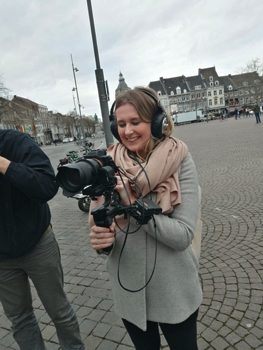 The filming overlapped with the beginning of the COVID-19 pandemic, which offered a unique opportunity to demonstrate the vital importance of implementing public health measures to keep people safe during these times. The final product of this campaign is an engaging video, sparked with humour and enthusiasm, of the students showcasing the dynamic and exciting field of public health. This video is available here.