While Israel was considered a success story during the so-called "first wave" of COVID-19, it is now entering its third week of lockdown. The lockdown started just on the Eve of the Jewish New Year (Rosh HaShana) on Friday, September 18, 2020. Thus far, there are discussions on targets for examining the effectiveness of the lockdown, such as the reduction in R (the average number of people who become infected by an infectious person) below 0.8 and a drop in the daily number of new infections from several thousand to several hundred, making it possible to conduct "COVID-19 routine life" in accordance with the “traffic light” plan, a differential approach which classifies the local authorities in Israel in four groups – green, yellow, amber, and red, according to their morbidity indices. Currently the number of new patients per day on a weekly average continues to be the highest in the world per capita, and Israel recently surpassed the US in the number of coronavirus deaths per day per capita. In the past month, there has been a 70% increase in the number of serious patients. In terms of new confirmed cases per million people, the percentage of positive tests and the number of those dead in relation to population size, Israel is toward the top of the list globally, even after adjusting for the high number of tests that Israel carries out.

With the situation of widespread transmission in all sectors and the rise in severe cases and deaths, the implementation of the "traffic light system" suggested more than two months ago – using differential measures according to the local situation, while strengthening municipalities and creating an integrated approach – will be delayed, waiting for better indicators. While community transmission is widespread, and rates of positive tests are above 13% there are major differences among sectors, where Ultra-orthodox Jewish (about 25%) and Arab sectors (about 17%) are facing higher rates.

Figure 2: Confirmed cases according to age and gender - Female (green) and Male (blue) 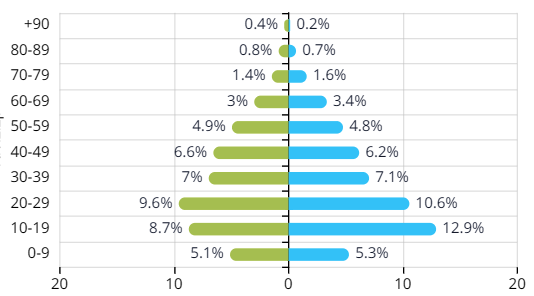 On September 29th, the Health Ministry published that the number of serious patients in hospitals had topped 800, which was previously stated as the upper limit that would cause extreme difficulty for hospitals. Many hospitals' directors announced that they are soon to reach their capacity in terms of their ability to take in more patients and handle the workload caused by the pandemic. This led to a national program for redirecting patients from overloaded hospitals, mainly in the North to other hospitals and strengthening of the system (adding beds, wards and number of healthcare workers). A recent report from the IDF Military Intelligence and the Health Ministry information center, evaluating the rate of coronavirus infection in Israel stressed that evaluation of the system should not address only the capacity of coronavirus units, but the general ability of hospitals to treat all kinds of patients.

Another interesting ongoing discussion is that of children. Although serious cases of COVID-19 remain relatively rare among Israeli children, pediatric wards across the country are reporting that children admitted to the hospital for reasons unrelated to the coronavirus, such as surgery, are increasingly testing positive for the virus. Up until a few weeks ago, coronavirus cases were a marginal phenomenon in pediatric wards. Within a month, since early September, the number of coronavirus patients aged 19 years or younger has risen from 35,000 to 75,000. The number of cases among children younger than 9 years old has doubled from 12,000 to 24,000. A mitigating factor has been the fact that children tend to have a lower risk of suffering a serious case of COVID-19, but even mild cases merit attention. A report published last week by the Medical Barometer team, a group of experts that tracks the situation in the hospitals, states: “The numbers of children testing positive who require hospitalization are increasing, and the inventory of beds for such children is small and not centrally organized. The small hospitals and those in outlying areas, which lack good solutions for hospitalizing children who test positive, have difficulty transferring such children for treatment in the large centers.”

The decision to enter lockdown created a fierce debate among both the public health community and the general public. While most public health experts thought that Israel should take more measures to deal with the current situation, the need for stringent lockdown was questioned – both its efficiency and larger price of its implementation. The broader context is also the lack of trust by all stakeholders, within a fragile political situation taking place after three elections, demonstrations and lack of compliance by all parts of society, especially large social gatherings such as weddings and religious events during the Jewish High Holidays. Criticism is being raised on the broader context of social and health inequalities that existed before the pandemic, now being exacerbated with the current lockdown. While public and media discussions of the current situation is stressing the lack of trust leading to low compliance in several sectors, there are also local success stories, such as in Yerucham (small local council in the southern district of Israel) and Kafr Qassem  (Arab village in the center of Israel, near the green line) – two examples where local leadership took initiatives to lower high rates of new cases, turning from "red" to "green" municipalities.

Apart from broader lockdown health consequences such as those related to mental health, nutrition and other non-COVID-19 related morbidity and mortality, economic consequences are a major aspect. The Bank of Israel reported that 17% of Israeli households previously having two employed persons (for example, a married couple with both partners working) now report that one person is out of work. In 2% of households both workers were fired, bringing the total number of households disrupted by the crisis to 19%. These economic consequences are hitting the lower socio-economic parts of Israeli society harder. Families with wages of up to NIS 5,000 and NIS 10,000 reported a loss of income of 20.2% and 20.8%, respectively; those making up to NIS 15,000 reported a 16.4% loss. The average drop for all households has been 19.5%.

As in other countries the response to the COVID-19 pandemic and the public discourse surrounding it in Israel have been inadequate in addressing the special conditions and needs of low socio-economic and minority groups. Currently, vulnerable cultural minority groups became a focus of COVID-19 infection due to their unique socioeconomic and cultural characteristics and their previously existing low levels of access to healthcare services. This requires tailored measures first to respond to their needs and then also to mitigate the spread of the virus. In Israel, the ultra-Orthodox Jewish community and the Arab population are the most prominent and well-defined minority groups, representing 12% and 20% of the total population, respectively. Addressing the needs of these populations should be done together with the communities, with awareness that responses might unintentionally (and sometimes unfortunately intentionally) turn into stigma, mistrust and finally loss of control.

Information on policies and regulations from the Israeli Ministry of Health website:
https://www.health.gov.il/English/Topics/Diseases/corona/Pages/default.aspx