In other news, I was delighted that so many ASPHER members joined the UK Faculty of Public Health webinar on the implications of a crash-out Brexit. Britain leaving the EU without a trade deal will be a disaster for the UK but will also have major impacts on EU nations. The major manufacturing nations will be hit directly and immediately, through cuts in sales, tariffs and disruption of component supply chains. Trade in food in both directions will be vulnerable with the unhappy prospect of food rotting in queues of trucks either side of the channel. Tariffs will also apply with instant 20% average increases in food prices for British customers and as high as 48% tariffs on meat and cheese exports from the UK to Europe. Countries reliant on tourism will also be impacted, more so in the longer term perhaps although the winter holidays are already crippled by COVID-19. In addition, British government departments and exporters are unprepared for the extraordinary excess of form filling they will now be required to do (now that we are ‘free’ of EU bureaucracy!)

But if our manufacturers and farmers, importers and exporters are unprepared, road hauliers are bracing themselves for long waits at ports, long waits on improvised lorry parks on British roads – and no-one has thought till now about their sanitary needs! There is also little evidence to date that emergency planners are prepared for food shortage, even food riots and civil unrest, other component problems and energy disruption and shortage of medical supplies and equipment. Crash-out Brexit will really be the crest of the tsunami thrown up by the perfect storm of pandemic, deep economic recession and cold winter pressures. But thank you my fellow Europeans for your moral support! 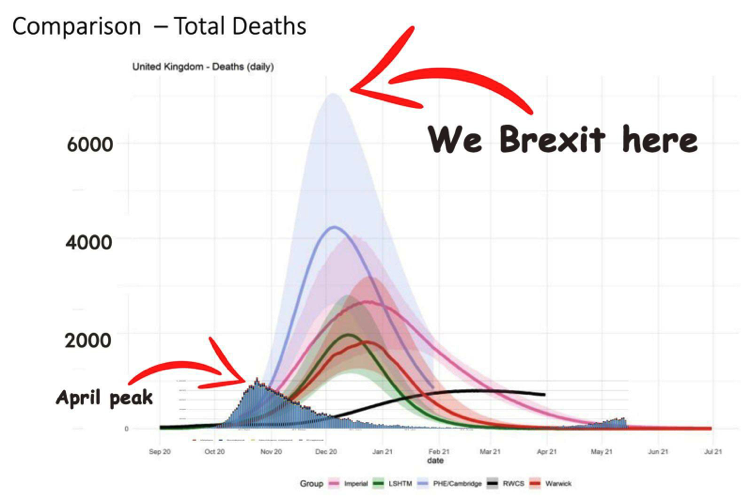 Figure: A twitter image of the perfect storm – the projections of UK deaths may all have been reduced – but the image still says it all

The United States: At an Inflection Point
Lore Leighton and John Middleton

Things are looking brighter across the pond with Joseph R. Biden presumed to be the President-elect of the United States upon reaching over 270 electoral votes on Saturday 7th November. In his acceptance speech, Biden has promised to ‘marshal the forces of science in the […] battle to control the [corona]virus, the battle to secure your family’s health care, the battle to achieve racial justice and root out systemic racism in this country, the battle to save the climate, the battle to restore decency...’ This comes as welcome reassurance after the current administration’s failures of ‘astonishing magnitude’, which took ‘a crisis and turned it into a tragedy’ as denounced by the Editor’s of the New England Journal of Medicine in their implied endorsement of Joe Biden. Within hours of the election being called and with more than two months to go before he takes office, Biden was making good on his promises by assembling his Coronavirus Advisory Board including among others, Rick Bright ousted by the Trump Administration for alleging they ignored early warning signs of the pandemic. The public health community and the World also look forward to Biden keeping his campaign promises to reverse the Trump decision to leave the WHO and to rejoin the Paris Agreement ‘on day one’ of his presidency.

President-elect Biden chose a historic Vice President in Senator Kamala Harris, who will be both the first woman and the first person of color to hold the office. He intends to carry this further into his cabinet appointments, vowing to seek a diverse leadership that ‘look like America’. Doing so should serve him well in his plans to tackle systemic racism and to advance racial equity. It will take hard work to heal the wounds inflicted over the past four years in the United States, but Vice President-elect Harris’ words bring hope when thanking Americans who, ‘For four years, marched and organized for equality and justice for our lives and for our planet. Then you voted and you delivered a clear message. You chose hope and unity, decency, science, and, yes, truth.’