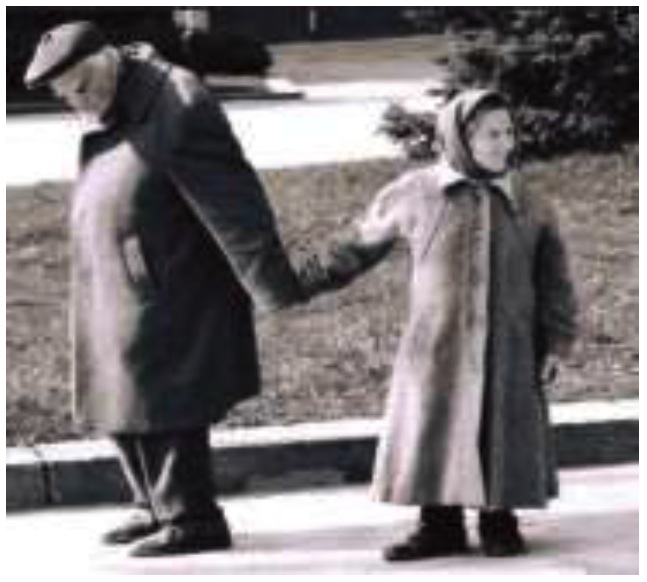 The old gentleman knows that she no longer knows him. She always looks away but he knows her. So he always holds her hand as the love of his life.

Greetings from Greece where an extreme Fire Risk (Category 5 alarm) and Very High Risk (Category 4) is in place for many areas, from wildfires. Watching its frenetic unfolding it is evolving into an unprecedented ecological catastrophe. Greece has many information resources from civil protection guidelines to daily fire prediction maps and a reasonable set of basic societal functions. It no longer has its unique school of public health. Its execution was an assault on the authority of interdisciplinary public health and an insult to its education and experience. The community looks up to, and is expected to look up to, a School in much the same way as the ancient mariners looked up at the North Star for direction.

Greetings from Greece where the World Health Organization, Europe and its Director General just held another summit this time on mental health. No one mentioned public health or the recent execution of the Athens School of Public Health. Its final declaration while holding promise reiterates the many similar documents that followed on from when the Stability Pact added health to its mandate and published the Dubrovnik Pledge and wrote the Skopje Declaration and initiated the Mental Health Project for the Balkans, circa 2000; promoting mental well-being; preventing mental health problems, tackling stigma, discrimination and social exclusion; representation of mental health in disaster health management, response to a public health crisis in full respect for human rights, democracy and the rule of law and now the required actions required to address the impact of the COVID-19 pandemic on mental health. To which I would add climate change and the problem space from the recent heat waves as well as anticipation stress to a button pressed and the fallout from social dementia.

When 9 years Ban Ki’ moon Secretary-General of the United Nations visited the Andrija Štampar School of Public Health¨ Zagreb he reminded the world of the many things relating to public health, human rights, philosophy and peace as he referred to Stampar and development of international public health, which starts with basic sanitation and hygiene practices.

The Athens School was one of the first in Europe; the one I thought might have been saved by the President's intervention when last in Athens. Melina Mercouri, whose grandfather was present at its opening, called it an important element of Greek culture. Melina was not around at the execution. She dreamt of an awe inspiring Museum where the Acropolis Marbles could be displayed. Twice I have had the privilege to address Europe’s leading experts in public health in her realized and inspiring Acropolis Museum.

In 2016, I took my ASPHER audience on a journey, over historical time and Geological space¨ into humanity’s often long trails of human chaos. An American Nobelist the first in physics captured the fastest thing in the universe, light, sidetracked it to pin it down in a most elegant experiment, mastered Greek mythology before mathematics¨ for which he was apprehensive Michelson’s smart teacher told him that mathematics should contain no fear since he knew Greek mythology. The man who measured the speed of light knew that before there was a world, confusion reigned and the Greeks called it chaos. Summing up I offered that in the coming storms, the chaos my hope is that public health will be seen by politics as a social instrument to minimize harm and maximize equality and a natural lingua franca for diplomacy with a special voice in foreign policy, health politics and health diplomacy, where reconciliation is necessary.

Mr. President and First Lady, without a short-lived revolution in public health by Eleftherios Venizelos the second attempt to launch a School and the entry of Greece into the league of advanced nations would have been much more delayed. A School, several times proposed, should have been a response to endemic malaria to a dismal background of debilitating diseases and the influx of more than one million refugees. It took a kick-start from a bizarre pandemic of dengue fever coming from Syria a decade after the Spanish Flu. I know you don't have to ask which part of the population suffered most with dengue's mortality rate of 6% and morbidity rate of 80%. The answer is given again with COVID. Dengue was also named breakback fever for which several quack cures entered the market to make money. Mental health was discussed then and reflected healthy in mind, healthy in body a maxim from ancient Greece.

Your efforts Mr. President to launch a comprehensive health system for all Americans were encouraging; your address to youth in Kenya, arguing the case of science and the merits of quarantine (Ebola) and your pledge to support Greece were inspiring. Greece became a much healthier nation as a result of early public health development; with manmade austerity and now nature inflicted COVID it has become more vulnerable.

Mental health has been on the public health agenda for years. It becomes more important after COVID and in a background of existential threats. The Athens School circa 1985 amalgamated a team of psychiatrists to develop teaching materials and conduct seminars with case studies on the transformation of mental health services from asylum to community. One highlight was the use of an incredible film, shot in Greece the Unwanted by Kostas Zois. Benjamin Rush entered the mental health field because of his naval officer son, with his insanity precipitated by him killing his opponent in a duel. Today, a mental health response will have to be orchestrated in a problem field that I call social dementia. I am sure that the countless COVID untold stories will have mental health components.

I missed Barack's 58th but I did forward him my birthday wishes first from Athens as well as after its celebration but from Chicago. In Chicago I spent time tracking down Wally but to no avail, talking on rapprochement (America-Russia) using the past history of collaboration in brain research and neurophysiology and ran into No One Taxi, whose driver Kester, from Nigeria played me his own music. In the field of brain research I was able to successfully recommend an American for the Gusi Peace Prize and Kester’s twin sister is called Ester for Easter. I now add my warm wishes to enjoin yours in the hope that they will help make his 60th birthday one he’ll never forget. Barack you say always loved hearing about the good work folks do to make a positive impact. Even within the problem space of social dementia there is incredible talent with individuals and groups doing incredible things. Yours is an excellent example. Storytelling with impact can only come from a cultured mind. Barack is a storyteller and a great orator, different but on a par with Churchill but neither is as good as Martin. When Barack was born 60 years ago Kennedy, King and Kennedy were still alive, the Donald was a teenager and I was contemplating Chicago.

Noting your question and in a framework of free association I’m drawn to Kipling who if he had been born in Chicago would have been named Michigan: If you can fill the unforgiving minute, With sixty seconds’ worth of distance run¨ Yours is the Earth and everything that’s in itÆ If we do not accelerate our efforts little will be left. Having been raised in a village registered in the Doomsday Book I’m also drawn to your just 60 seconds, which may soon be substituted for its current 100 symbolic seconds of the atomic scientists. Let’s hope that the recent Biden-Putin summit has placed some sort of brake. The Doomsday Clock is a well-recognized indicator of the world’s vulnerabilityÆ 1000 years ago the Doomsday Book was first compared to the Last Judgment or Doomsday as described in the Bible, when our life’s work is held up for God’s appraisal. It is now a metaphor for decisions that cannot be reversed.

As a youngster in wartime Yorkshire, it was greater love hath no man than to lay down his life for another. Now as an octogenarian, I also say greater nobility hath no-man-or-woman than to sacrifice freedom to turn back the symbolic atomic clock. An example being the elderly Catholics of the Kings Bay Ploughshares 7.

This year and in response to your specific question I had the privilege to talk to students in the American Community School of Athens coming from 63 different countries on resilience. Apart from reading Meg Meriles, I used two unique expressions one of the late Ruth Bader Ginsburg, the other from the late John Lewis respectively; because you are not getting wet¨ don’t throw away your umbrella in a rainstorm and a simple stroll to the store for some Skittles or an innocent morning jog down a lonesome country road can lead into a nightmare. I also participated in the Ideagen Acceleration Summit to discuss Health, Education and Peace as well as Happiness and Education the second with the peripatetic Minister of Education, Bhutan. Thirdly, I am a participant in a developing program named philosophy and the Koran through the Gual Foundation, Malaysia, which has recently provided lighting to a village and is currently working with another community to reduce poverty by agricultural activities in bananas, coconuts and sugar cane. Finally, I reached out to a very concerned friend, which is written up in wsimag. The forces of disaster have separated humanity from its star.