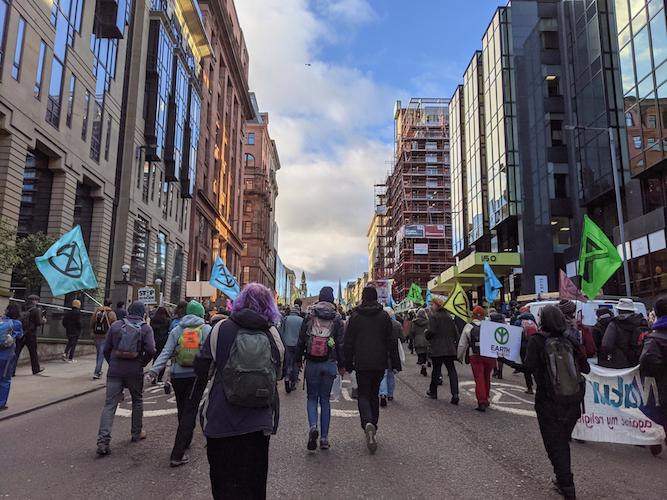 The long-awaited COP26 came to an end almost two weeks ago. In Glasgow, Scotland, almost 40,000 delegates got together to discuss needed steps to mitigate climate change. This was the year that health got a strong voice. As one of the most prominent advocates said to me in the Shilling Brewing Company – the place where health advocates came together every evening to debrief and connect: “It is good to see so many people from the health field here.”

It was, indeed. I attended the COP26, not from the inside like many others, but from the outside. Being in Glasgow during the first week got me to search for, be directed to and find some interesting events happening throughout the city. There are two of them that I will not forget soon. The first one is the panel organised by Dominic Hinde, an inspiring Lecturer at the University of Glasgow. Dominic has a background as a journalist and is pursuing an academic career as a multi-disciplinary researcher in climate change and the role of media. The panel got together three scholars with different backgrounds: Sam Walton (literature, Bath Spa University), Lewis Coenen-Rowe (arts and humanities, Creative Carbon Scotland), and Naveeda Khan (anthropology, Johns Hopkins University). The talk focused on the diversity of debates surrounding COP26. It made me realise, first, how cool people from other disciplines are, second, as someone with a public health background, how much there is still to learn from them. In the past years, we have talked about breaking silos many times. This is what that looked like.

The other moment that made an impact on me, is while walking along with the march organised by Extinction Rebellion – a non-violent grass-roots organisation active in many countries. I was invited by an activist from the Netherlands. The march attracted thousands of citizens, active and not active in the organisation.

The connection between these two events lies in what Lewis Coenen-Rowe from Creative Carbon Scotland said during the panel: those inside the COP should talk with those outside and listen to their demands. That sentence stuck with me. Coming back home after a week in the UK, I opened my Twitter and saw message after message that people were disappointed. Not enough was done. Speaking on behalf of the Climate Justice constituency is Asad Rehman, conveying their disappointment in strong words. As Naveeda Khan said, the COP is the place for the Global South to finally be on an equal level with the rest.

I am grateful for ASPHER to have provided me with the great opportunity to travel (as green as possible) to Glasgow. I met great colleagues whom I like to thank: Alison McCallum (University of Edinburgh), Helen Ross and Marc Davies (UK Faculty of Public Health) and many others. I saw how the health voice needs to be even stronger, as is being reflected two weeks after COP still, in the health advocates group chat. But COP is not an end station; as ASPHER, we are doing what we can and what we do best – climate and health education. We will continue advocating and working together with our members and partners to ensure that we did our end, preparing the current and future workforce to be ready to address climate change’s impact on health.

For those who have not followed the COP26 happenings as closely, I am glad to be able to share a summary by Arthur Wyns (Climate Change and Health Unit, World Health Organisation):