For the second year running, Christmas is saved! 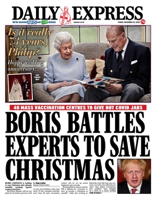 This year Omicron is with us for Christmas, Boris Johnson has fought off the scientists, just as he did last year.

Since August, ASPHER publications have warned about this state of ‘deju-vu’ or ‘groundhog day’. People have heard me say that all policy makers and public health specialists should ‘look east’, during the pandemic. The experience of SARS-COV-1 made East Asian countries acutely nervous and highly prepared for any new appearances of potentially pandemic viruses. In most countries of Europe, we remain under-prepared, unwilling, and unable to act and react, not being prepared, even after the experience of at least 3 waves of the SARS-COV-2 virus and six major variants of concern. There are a few notable exception who seem able to respond decisively, which I discuss in my ‘European blog’ – number 2.

In the UK, scientists have called for urgent action, as set out by the Scientific Pandemic Influenza Group on Modelling, Operational sub-group (SPI-M-O) for the Scientific Advisory Group for Emergencies (SAGE) and Independent SAGE. Independent SAGE called for a short circuit breaker enabling limited mixing from the 25 to 28th December. In Christmas week, the prime minister has emerged from Cabinet  telling us no new restrictions will be put in place, he still needs more evidence.

Prime Minister Johnson has forgotten or ignored the words of Dr Mike Ryan, Executive Director for Emergencies programme at WHO from early in the pandemic, replayed frequently on social media. ‘Be coordinated, be coherent, go after the virus…be fast, have no regrets……you must be the first mover…. If you need to be right before you move, you will never win. Perfection is the enemy of the good.’ In England, the runaway train is heading for the buffers, and we still need more evidence that it will kill us, or kill our economy. And we are now too late to make the changes. The Prime minister has said he will not hesitate to act, but many on social media have commented – that that is what exactly what he has done… hesitated.

Other scientists have suggested ‘We must trust to the common sense of the public…Lockdown cannot become an annual winter event’. Agreed; but leaving it to individual citizens to decide, doesn’t help the hospitality industry, the health service personnel who are falling sick, or the sports programme. People are voting with their feet and avoiding the high street. The London mayor has declared a major emergency in the capital and hospital admissions are now rising. It is no longer enough to model the impact of COVID-19 on hospitalisations and deaths; what is new with the rapidly moving Omicron is the power to demolish entire workforces services through sickness absence. In the UK, already exhausted health services personnel are falling sick – 30% sickness absence in some cases; 100 London ambulances are off the road due to staff sickness.

The UK Prime Minister has fought off the advice the English Chief Medical Officer decided he should offer to the public, that they should consider very carefully which social events were important to them, ahead of their planned Christmas family gatherings. It was wise advice from the CMO, no more than many of us were already offering to our families and plotting our course through to Christmas day. It did not help the hospitality industry though who needed certainty and government support for the hits they then took, in ‘Crimbo Limbo’. Our government has created the conditions whereby they do not prevent death and disease, and they do not help the economy.

Chand Nagpaul, Chair of the British Medical Association has said it, ‘boosters are not enough: Britain needs a strong, immediate plan for infection control’. ASPHER has said it ‘we need a COVID-DO-IT-ALL approach’. Just relying on vaccines, or testing, or isolation alone won’t work. Indeed, the Union, Doctors in UNITE have suggested that vaccines are the last line of defence – current actions by the UK and other countries are a distortion of what is needed – which is personal and collective protection from airborne spread, through masks and ventilation measures, as shown in the figure. 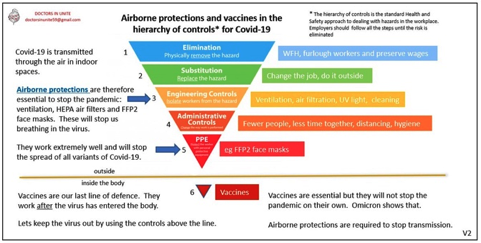 A global approach to a global problem

And we need to constantly remind ourselves that the pandemic will not be over until it is over for everyone. ASPHER has been campaigning with the Global Network for Academic Public Health and the World Federation of Public Health Associations, for a Vaccine Trade Related Intellectual Property Rights Waiver. We have to grow the world’s capacity to produce vaccines, and deliver maybe every 6 months to everyone on the planet. It is to the shame of all governments that this is not happening, and the UK government’s most recent pronouncement does not give any confidence that there is really a global effort to combat the pandemic. The disgraceful treatment of South Africa following their brilliant identification for the Omicron variant cannot be repeated. We must act together a global community, scientific, political and general public. We really do have to be in this together.

The UK Prime minister has averted the prospect of the UK becoming a ‘public health socialist state’. The government and the ruling party that supports it has become reduced to mantra, when lives, and the economy are at risk. The UK is descending into ‘hypernormalisation’ – that world experienced by the Soviet Union before its collapse in the late 1980s. Everyone knew they were being lied to by government and by the officials and the officials knew they knew that they were lying, but no-one seemed to be in position to deal with the lies, or change the downward spiral of a collapsing state. 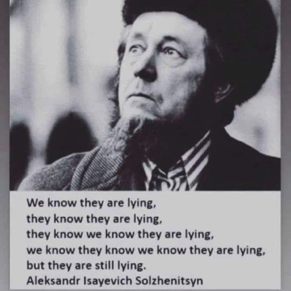 There continue to be allegations and legal challenges of corrupt deals in health service procurement, and now with the Immensa screening failure scandal. Our government is at risk of legal action over parties allegedly held at Christmas and later in May, during lockdown. Whether they happened or not, a senior government press adviser resigned. Inflation is running at 5%. We have yet to implement the import controls expected under the UK-EU Trade and Cooperation Agreement. The minister responsible for the failed Brexit negotiations ostensibly because he didn’t believe in the draconian restrictions for COVID control – neat opportunity to leave. The new Brexit minister, Liz Truss, is on record in her support for A trade deal has been struck with Australia that leaves the UK, and UK farmers poorer, transports smaller amounts of farm produce 1000s of miles around the world, further damaging the carbon footprint of Britain And we still do not have a working agreement with our nearest and dearest trading partner, the European Union. Save us please, my friends!

Happy Festive Season to you all, colleagues and friends. Come back refreshed for the new year and the continuing fight to improve and protect health!

Yours in Health, Love and Peace,