Since ASPHER’s last newsletter, there has been a seismic shift in the health, economic and social condition of the people of Europe. Russia ceased its posturing and war games and invaded Ukraine without a cause – illegally, immorally, cruelly and brutally. As United Nations Secretary General Antonio Guterres has said ‘war in Ukraine is morally unacceptable, politically indefensible and militarily nonsensical’. 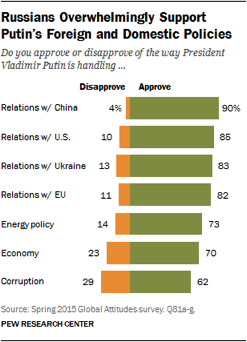 Early in the conflict it was appropriate just to lay the blame and shame on President Putin. As the atrocities mount higher, Russian civil society opposition has been limited; the majority of the Russian public support Putin on Ukraine, even though they see the economy is failing (Figure 1).

Some sectors, shamefully, have actively supported the war. The Russian Union of Rectors have, rightly, been condemned for their support for Putin and so too the Russian Orthodox Church. There are courageous pockets of Russian opposition to the war. They deserve our support and encouragement. Students, teachers, and staff of Moscow State University of Lomonosov have been signing an open letter against the war since March 15th, 2022. It is worthy of repeating here. The statement of the anti-war committee of Russia can be found here.

The role of the public health community in war

The massacre of Bucha and the continuing apocalypse of Mariupol show this act of aggression for what it is – a war crime and genocide. It is a medieval war of conquest. There are rarely justifications for war, and this certainly isn’t one. ASPHER’s statement, ‘The Role of Europe’s Schools of Public Health in Times of War: ASPHER Statement on the War Against Ukraine’ has now endorsed by the Global Network for Academic Public Health and other Public Health organisations. It calls for prevention of war and urges health systems and the public health community to be a bridge for peace. Health promotion is peace promotion. However, when wars happen, it is within the competencies of the public health community to monitor the health and social impacts of conflict, to organise responses in delivery of humanitarian aid and support for civilians under fire, and refugees. Many of our schools, for example, in Poland, Germany, Romania and Moldova are active in the response to refugee physical and mental health and social needs. As in all disasters, there will be a necessary role for public health in recovery, rehabilitation and reconciliation. Our ASPHER task force on war will be reporting further on our work programmes on local European and global impacts of this terrible assault on the people of Ukraine.

Global health impacts of the war on Ukraine

The impacts of the war are global. The obscene reliance on Russian oil and gas supplies has compromised European political positions greatly, silencing any criticism of Russia in the eight years of the war in Ukraine. EU leaders have shown welcome resolve and unity in terminating pipeline construction and taking steps to accelerate reducing use of Russian fossil fuels. However, the reality is very different: as EU countries have provided 1 billion Euro in military aid to Ukraine in the entire conflict, they have paid Russia 1 billion Euro per day for oil, gas and coal. There is still manoeuvring around replacing, or using, Russian fossil fuels. Germany is unwilling to stop Russian oil and gas, as it seeks to keep its car plants moving. UK Prime Minister went cap in hand to get more oil from Saudi Arabia and UAE and failed. The UK’s new energy strategy proposes to build eight more nuclear power stations, no doubt with the expertise of Electricite de France, or the Chinese. There still appears to be very limited vision for the fossil free future which could be there for the taking. The UN IPCC report this month tells us we are almost at the point of no return from climate breakdown, but encourage us to achieve much more, and quickly. Germany, to its credit, is expressing more ambition to become 100% reliant on renewables by 2035. There seems to be very little acknowledgement of the need to invest in energy conservation, through measures in housing, built environment, public transport and working practices. Germany and France are piloting incentives for using public transport, to reduce the impact of the higher cost of living due to energy costs. Working from home and a shorter working week would be good for employers, reduce the pressure on energy costs, reduce congestion and air pollution, and help us reduce the spread of COVID.

There is a growing recognition of likelihood of shortages of wheat, sunflower and rapeseed oil from the great Ukraine/Russia breadbaskets of the world. This will impact most heavily on the Middle East and North African countries who rely on food exports from Ukraine and Russia, directly and via the World Food programme. Prices were going up before the war – through the pandemic and climate change (Figure 2). 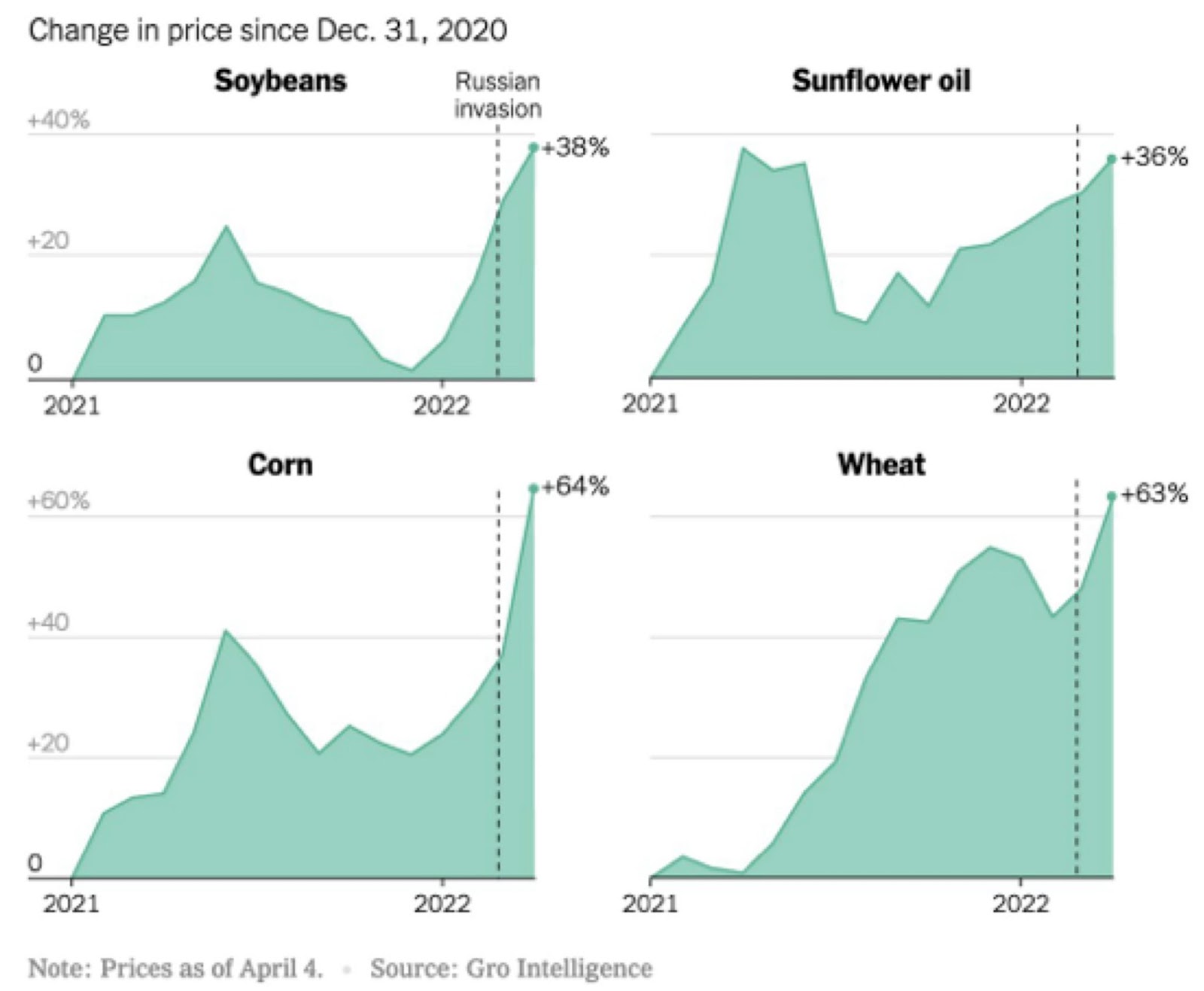 As when any economic shortages occur, we are already witnessing the problems of speculation on prices, which may prove to be the biggest problem. And as with all shortages, the poorest countries and the poorest people within countries will be worst affected (Figure 3).

Confronted with these global challenges of shortages in food and fuel, we must not ‘waste a crisis’. We must take the opportunity to reduce our reliance on fossil fuels, and change our food productions and supplies systems. We must stop feeding cars and livestock with grains and bio-fuels; we must eat the vegetables we might have fattened animals with; we must cease reliance on petro-chemicals to feed crops; and we must stop feeding plants with fishmeal that people could eat. We must develop local food production and delivery systems – creating jobs, improving environments and health, and reducing reliance on oil-hungry transport.

Truth: the first casualty of war?

Truth, they say, is the first casualty of war. Knowledge will suffer, cooperation, inevitably will wither. The EU has halted Russian involvement in the Horizon Europe programme. 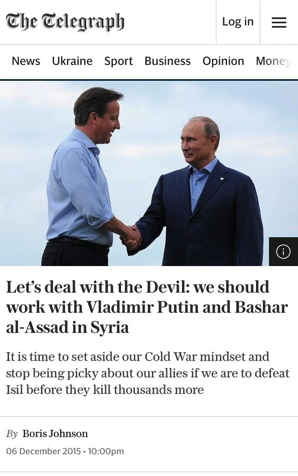 Truth was the casualty before this war. Truth was a casualty as President Putin’s army of super rich oligarchs networked with the rich and powerful around the world, but most notably in London. They ingratiated themselves into the fabric of money markets, media outlets, opinion forming circles and think tanks. They laundered billions of funds stolen from the Russian people. They bought foreign officials and compromised decision makers (and see Figure 4).

...just before the war broke out that was…

Truth was a casualty in Putin’s strategic use of disinformation. The Russian bots and troll farms whose activities on an industrial scale, systematically destabilised democratic elections around the world and created disunity and division, between nations, most notably through the Trump election, through the Brexit referendum and the United Kingdom leaving the EU.

In their operations aimed at the unsuspecting individual members of the public, the Russian bots and trolls have seeded doubt, distrust, and distress. People do not know what to believe – in their voting decisions or in their personal behaviours – whether it is e-cigarettes or vaccinations. We have seen Russia wage ‘information wars’ about vaccines, creating more doubt and a climate of distrust in national health systems and policy makers and in professional health advisers. Ironically, vaccine hesitancy has been fuelled most disastrously in Russian and Eastern Europe, closest to the places where the disinformation has been generated. Ironically also, Russia has sought to buy influence through ‘vaccine diplomacy’ as we have seen in the COVID-19 pandemic. When it suits, the message is ‘vaccines work’.

President Putin has exercised power for its own sake, just to see what he can get away with – in the growing litany of bio-terror poisonings, most recently Russian opposition leader Alexei Navalny. Public health officials have often played a central part in the emergency response. He has exercised that same power against Chechnya, Georgia, in Syria, and in the Ukraine, since 2014. Global leaders have been destabilised, disunited, incapable of a coherent response… until now perhaps.

For me, the Russian destruction of Ukraine presents the most extreme case of an unexplainable act of aggression – one man’s grudge against a country he doesn’t think should exist? We cannot allow any individual to be able to hold such power, anywhere in the world. Lord Acton’s famous quote ‘power corrupts, and absolutely power corrupts absolutely’ is written extreme and large in the suffering of the Ukrainian people. Placing all the engines of the war in the hands of a few people, wielding absolute power will end badly for our world. We need to invest more power in the global organisations we have. We need our national leaders to comply with the rule of law. And we need them to cede authority to international decision-making bodies, when only they can find the solutions to our problems. I have always advocated for strong multidisciplinary well-resourced public health bodies. I have long suggested our public health community needs to include international lawyers, political scientists, economists, and theologians, if we are to address truly global threats of conflict, political unrest, mass migration, as well as environmental degradation and climate breakdown. We must now set all these in a context of geo-political health. We failed to anticipate the war on Ukraine, and so we have had no instruments by which we could prevent it. We need a stronger understanding of the purely political forces which can lead us to better health, or to destruction. That means arming ourselves with the knowledge and forming the alliances with the experts in geopolitics. One thing is clear from this conflict, no-one has exclusive knowledge of what to do and how to respond. It is in the traditions of public health to seek to best evidence, work in partnerships and apply the best responses. Preventing war is our greatest challenge.

There is no question that war in Europe has taken priority over the pandemic – in our personal and national risk assessments. But the pandemic is still with us, and the threat is still real. I will be saying more about this in a second blog piece.

I will also save my general comments on ASPHER’s recent business for a companion blog.

Thank you for reading. Wishing for a speedy end to this conflict and for a peaceful world.