President's Spring 2022 message - Part 2: The pandemic is not over! 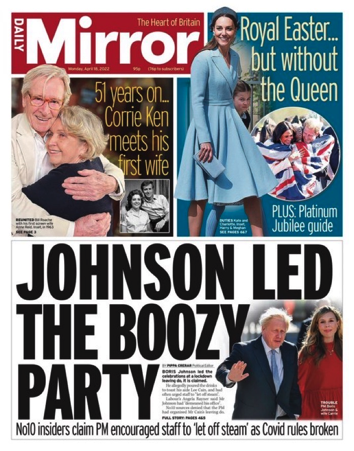 The focus of European governments, and their citizens, has understandably shifted to Russia’s unprovoked, unjustifiable, and catastrophic war on Ukraine. But ignoring the SARs-COV-2 virus doesn’t mean it isn’t there. Many European countries have now been hit with waves of Omicron BA.2 and other members of its family. The pandemic is not over. Western leaders may be underplaying the seriousness of the virus, or asserting, like those in my country, that COVID is over.

United Kingdom experience: ‘We came out of the pandemic faster than anybody else’

The UK’s disgraced former health secretary, Matt Hancock, is trying to rewrite history, and a new mantra is emerging from government circles that the Prime minister ‘got all the big calls right’. We have now had 190,000 deaths where COVID has been recorded on the death certificate. The current Health Secretary, Sajid Javid, says we will learn to ‘live with COVID’. Prime Minister Johnson was trying to hide from questions of his COVID law-breaking on his India tour. He told Sky News Editor Beth Rigby, that ‘In Europe, we came out of the pandemic faster than anybody else’. A great Public Health exam question: critique this claim! 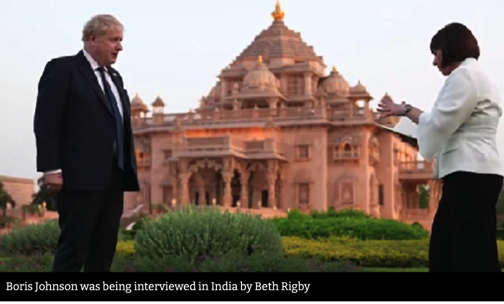 Meanwhile the UK has set new records for daily cases ever in the pandemic and now the highest numbers of weekly deaths since March 2021. Since January’s announcement that restrictions would be ended, there have been 19,000 more COVID deaths in the UK. Cases in the UK appear now to have peaked, but we wouldn’t really know, because our government has dismantled basic surveillance reporting and stopped free lateral flow tests… We rely on the most excellent citizen science of the ‘ZOE’ app for people to report their symptoms, to know how cases are doing. Meanwhile hospitals are still overwhelmed, through cases of Omicron, and through staff absences. Emergency services are on their knees. In the UK, the number of people waiting for routine NHS medical and surgical procedures has passed 6 million. Calling these procedures ‘routine’ hides the reality of lives on hold, people racked with pain and preventable disability, and in some cases at risk of dying before their time. Excess mortality remains much higher than expected.

Sadly this empty and dangerous slogan is proving influential with other political leaders across Europe. We have seen another huge wave of COVID-19 sweep through. As for the UK, this seems to be past its peak, in cases and in deaths. It has affected a larger number of people, the case fatality seems to have been less, but the numbers of cases have been so large that number of deaths has been another major disaster across Europe; less than the Alpha and Delta infections in the second wave, but not by much (Figure 1)... 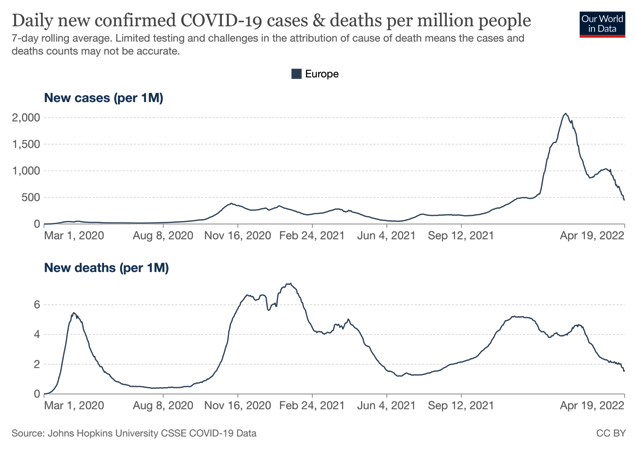 Omicron BA.2 has hit countries like Finland, who have protected themselves previously. Their death rate currently is one of the highest in Europe. However, with Norway, their cumulative death rate remains low. Both countries have been protected from the worst impacts of the disease through vaccination. Greece, Poland and Lithuania have seen high death rates in this third wave of the European pandemic, overtaking former front-runners, Belgium, UK and Italy (Figure 2). 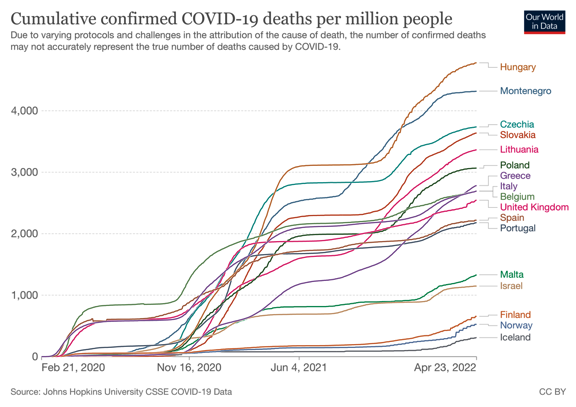 Other Central and Eastern European, Balkan and Baltic countries have climbed the cumulative mortality rates table since the second wave (Figure 2). Sadly, low vaccine uptake is a clear factor in this population health disaster. There is considerable mistrust of vaccines, and the vaccine policy makers, on the part of Eastern Europeans – in their own countries and in their adopted homes. 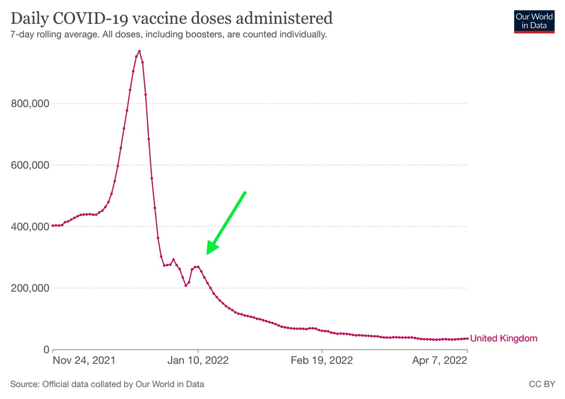 Pretending COVID-19 has been defeated has had a huge negative impact on vaccine uptake in the UK (see Figure 3). If the pandemic is over, why do I need to be vaccinated?…

Another lie which has become a habit for UK government ministers is how great we have done on vaccination. After being front-runners, with Israel in the second wave, Portugal, Malta, Ireland, and many more have overtaken their efforts, and seen it through to complete the protocol (Figure 4). On booster doses too, at least seven European countries have done better (Figure 5). 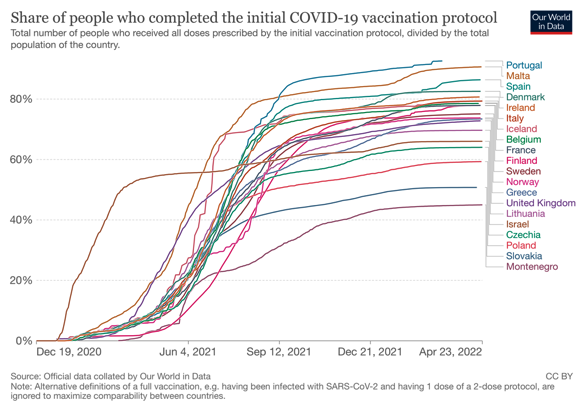 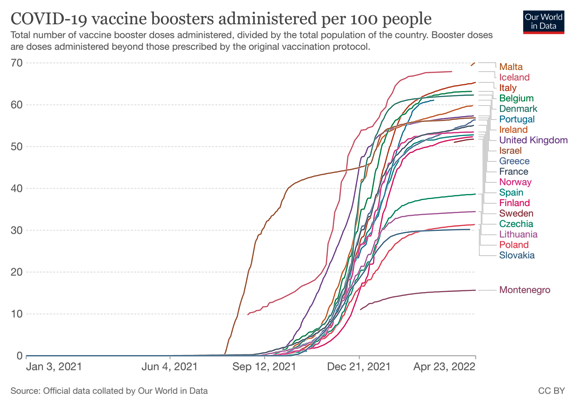 The UK does not have a great record as a ‘completer-finisher’ in the vaccine stakes. The failure to maintain a ‘vaccines-plus’ approach has seen continuing suffering and high death rates, fear on the part of vulnerable groups of people, a growing pool of adults and young people with long Covid and late manifestations of COVID.

Pretending COVID has been defeated has meant a huge burden on the working population: health and care services, teaching and other sectors of the economy continue to be hit by the spread of Omicron – and its impact on staff sickness absence. Airlines across Europe have been severely hit by Omicron. Removal of mask requirements on flights has come back to bite an industry desperate to make up lost income but foolishly throwing away one of the protections which recent flyers benefitted from. If I was flying, I would want my airline to require masks of all its customers: just ‘recommending customers use them’ is not enough.

The ASPHER Covid-19 task force has always expressed the view that Omicron is ‘mild’ only because of vaccination. We have only now to look at the wave of Omicron in China – in Hongkong and Shanghai especially, to see that this is the case. Hong Kong has had a severe spike in mortality (figure 6) – attributed to the lack of vaccine coverage in older adults.

There has been a degree of smug observation of the wave of Omicron ripping through Hong Kong, China and South Korea. Even New Zealand has now experienced an Omicron wave and a rise of mortality. For all these countries the rise in death rates is much greater than they have previously experienced, but with the exception of Hong Kong, much less than wealthy Western vaccinated countries are still seeing. 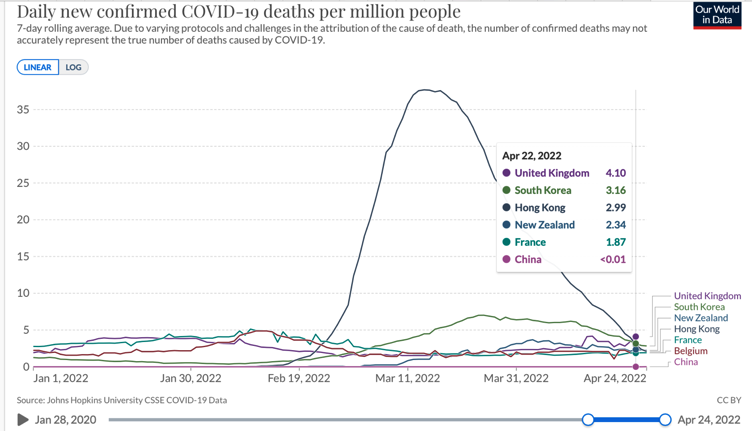 The East Asian countries cumulative death rates are unlikely ever to pass those of countries like the UK, France, and Italy, afflicted from the first wave. The countries which pursued Zero-COVID suppression strategy public health programmes bought time, before vaccination could be put in place. The Omicron wave has overwhelmed even China’s ability to provide isolation facilities – the ‘fangcang’ hospitals that served in earlier waves. The speed of spread of Omicron has challenged New Zealand, Norway and Finland similarly; but still not as fatally as has been the case in the UK, Hungary and elsewhere in Europe (Figure 7)… 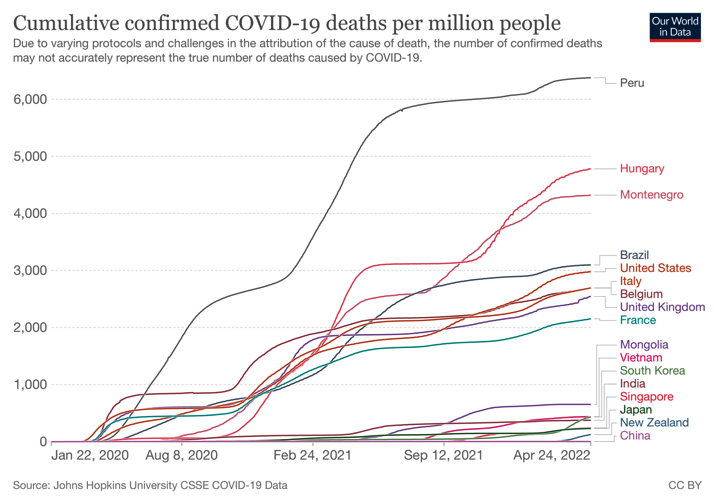 It is shameful that western leaders observe with misplaced, schadenfreude the terrible failure of ‘zero COVID’ East Asian health administrations. 39 deaths in Shanghai attracted the attention of the British press on 25th April (Figure 8), when 600 UK deaths did not get a mention. 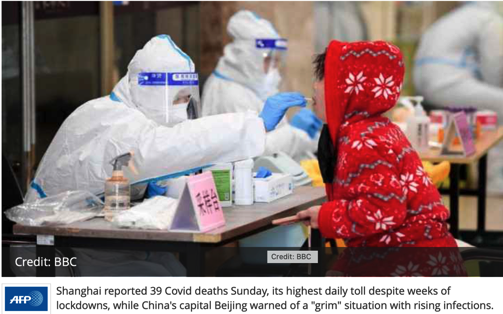 Continued COVID nationalism is threatening global health and the economy. The rich western wealthy world has squandered the protection of the heroic, scientific vaccine collaboration. The absence of commitment to global health approaches is killing large numbers of people never recorded as dying from COVID, whether for example, in India, or Zambia. The dreadful experience in Shanghai will have global economic impact as one of the world’s major financial centres is heavily compromised, and severe privation and food shortage affect its 26 million people.

These are global disasters requiring geopolitical commitment. And while we fail to act collectively, the virus continues to mutate. It has not even needed a new variant of concern to cause havoc across the globe; new members of the Omicron family are enough for the present. If we fail to follow a vaccine plus approach, all our communities will continue to be factories for new variant production. We will continue in a state of perpetual COVID. We will not be ‘living with it’ we will be dying with and disabled by it. And there is a new form of childhood hepatitis appearing in many countries now, of unknown origin, and unknown significance. It would be nice if our collective knowledge was to be applied to identification and prevention. It is just another example of why we need much better global health systems than those we have. The pandemic treaty must succeed. There must be a Vaccine TRIPs waiver and commitment to mass vaccine production worldwide. There must be real investment in global public health responses and global public health training and capacity.uandered the protection of the heroic, scientific vaccine collaboration. The absence of commitment to global health approaches is killing large numbers of people never recorded as dying from COVID, whether for example, in India, or Zambia. The dreadful experience in Shanghai will have global economic impact as one of the world’s major financial centres is heavily compromised, and severe privation and food shortage affect its 26 million people.