Home » Member's blog » Other » The danse-macabre moves offline, out of sight,...

The danse-macabre moves offline, out of sight, out of mind 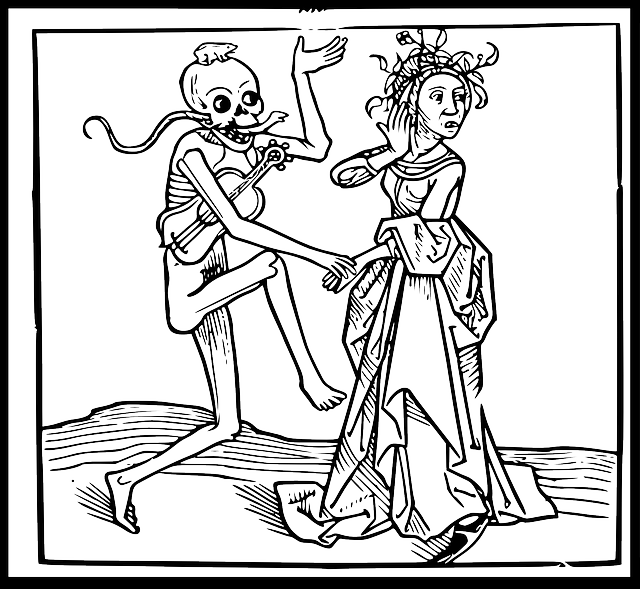 Every Sunday or Monday, until now, a danse-macabre had played out from the press gathering at Number 10 Downing Street. In the Medieval allegory, skeletons joyfully skipped and jigged, leading us damned souls to our graves, preparing us for the inevitability of our fate. In the UK, people have been conditioned into the acceptance of death and the everyday ordinariness of the corporate manslaughter being perpetrated by our government in sanitised daily announcements. It has not been their fault, it is a matter of fact, a way of life. A government minister with a solemn air, would give us a new low figure for the number who ‘have sadly died’ from COVID-19. Just over a week ago Secretary of State Hancock rose to the level of triumphalism announcing the death toll was ‘only’ 36. He was roundly slapped across the face by the twitterati. Everyone in the country understands the figures go down at weekends – not because they go down, but because the records don’t get through from hospitals.

The scale of our country’s continuing disaster is difficult to take in.

OK Minister – recorded deaths down to 36? – the same number as in Venezuela, or Lebanon, or Kosovo – in their entire outbreaks.

On June 22nd, it was down to 15 around the same as Cyprus, Georgia and Madagascar. And two more than the Diamond Princess cruise ship which held the world spell bound for days as its disaster unfolded.

Our rolling average at 19th June was 130 – similar to Kazakhstan, Oman and Kenya’s entire epidemics.

Any one of these numbers in a single news story would be a major disaster capturing public attention for days or weeks. Too big for a car crash. The UK death toll is still around a Boeing 737 crash everyday. Or a Eurostar every five days, from our train-wreck government. 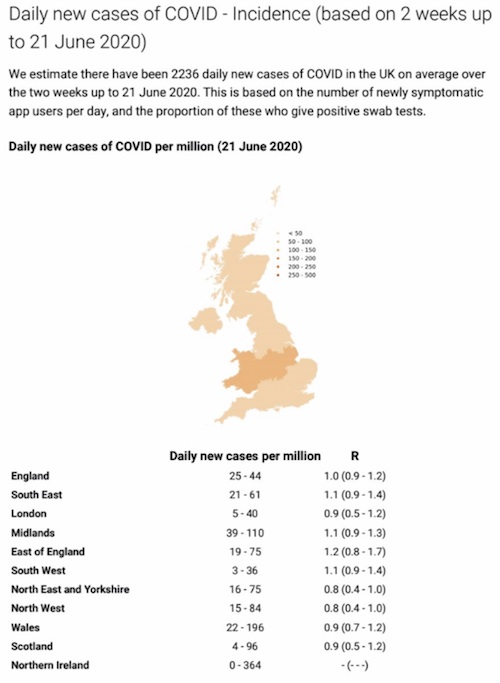 We have been honed in the language of war – coronavirus is an external enemy and it is now in retreat. The conditioning of our political masters has been to tell us things have been done right, at the right time, there have been sacrifices and we have now earned the beer, haircut and sun. It’s the populist’s way – tell us what we want to hear, not what we need to understand.

COVID infections stopped falling in the week of 24th June at 2341 per day. We have been groomed to understand the reproduction rate- and accept anything below 1 – in Wuhan, lockdown only came off with R at 0.2. And according to most of the R is over 1 or hovering there when including the upper confidence interval.

Meat processing plants are becoming the new front – taking over from nursing homes as the next scandalous neglected breech into which our foe advances. And whole communities will have to be shut down again, because we have instantly forgotten what we learned early on about the exponential attack rate of this virus, if allowed unchecked. 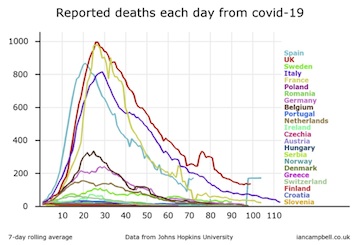 As things go from bad to worse, our prime-minister has announced almost the complete abandonment of lockdown measures – asserting that there is ‘no risk of a second wave overwhelming our NHS’. This at a time when most sources of scientific opinion are saying plan for a second wave, plan for the worst and only hope for the best. The prime-minister made this announcement on a day when 171 deaths were recorded in the UK…

We are all encouraged to rejoice, breathe a sigh of relief and be thankful to our government for the apparent success, and sticking to the plan. We can fill the beaches of Bournemouth. But we are abandoning lockdown at a higher level than any other country in Europe.

And the curve is declining so slowly the deaths will not have reached zero by the time we go into the inevitable second wave in the autumn, according to the Gates Foundation funded Institute of Health Metrics and Evaluation in Washington. 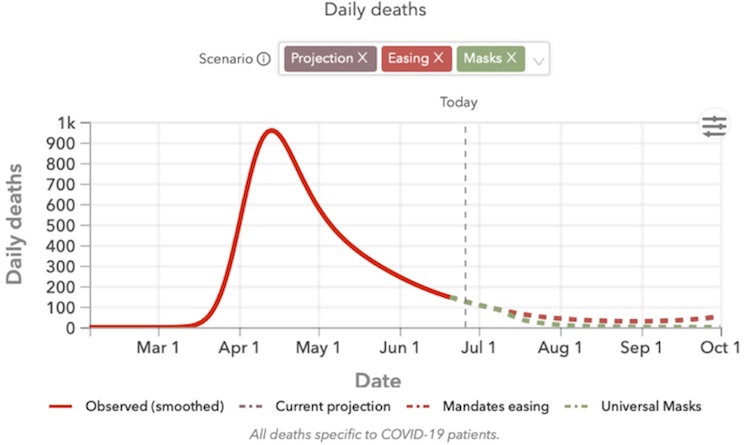 The United Kingdom is also releasing itself from lockdown at a time when there as many deaths as two days into starting lockdown, 187.

We are not in a war, we are in a civil disaster, the biggest act of governmental failure ever in the UK. We are victims of serial acts of negligence and wilful mismanagement. It is the biggest single act of corporate manslaughter our country has known. People have said it before about war propaganda; in the era of coronavirus, blind acceptance of our rulers’ orders will get you killed.

And now the danse-macabre is over, at least for the summer, or is at least, going offline…

There are to be no more daily briefings – if there is no information, there is no problem.