ASPHER Survey: diversity and intersectionality in public health education
21 Jun 2022
We are delighted to invite you to participate in an online survey about your perceptions of and experiences with diversity and intersectionality in public health education. The concepts of diversity and intersectionality are increasingly recognised to...
more...
Call for ASPHER Award Nominations
14 Jun 2022
ASPHER has updated our awards policy and is launching a call for nominations! We will keep the signature Andrija Štampar Medal and the ASPHER Good Practice award has been updated with new criteria - now becoming the ASPHER Teaching & Practice...
more...
June 2022 ASPHER Newsletter - MESSAGE FROM THE SECRETARIAT
13 Jun 2022
Download the June 2022 ASPHER Newsletter here!
ASPHER Secretariat is even more impatient to see members in person at the ASPHER Deans’ & Directors’ Retreat which will be a hybrid event from 14-16 October held in Sofia, Bulgaria and...
more...

Started in 2006, ASPHER’s European Programme on Public Health Core Competences has involved more than hundred European public health teachers, scientists and practitioners in the development of lists of competences for public health professionals. In the first round, all ASPHER member schools were invited to contribute to six workgroups, which lead to the first list of competences (1). Thereafter, European ministries of health were invited to participate, among other things in a conference at Aarhus University in April 2008, where, in the end, 27 European countries were represented, by decision makers and by teachers and scientists. At the same time the first two in a series of national practitioner-teacher workshops were performed, in Slovenia and Scotland, respectively (2). This all led to the second, enlarged list of competences (3), which was presented in October 2008 at a second European conference in Paris, as part of France’s EU Presidency that year. 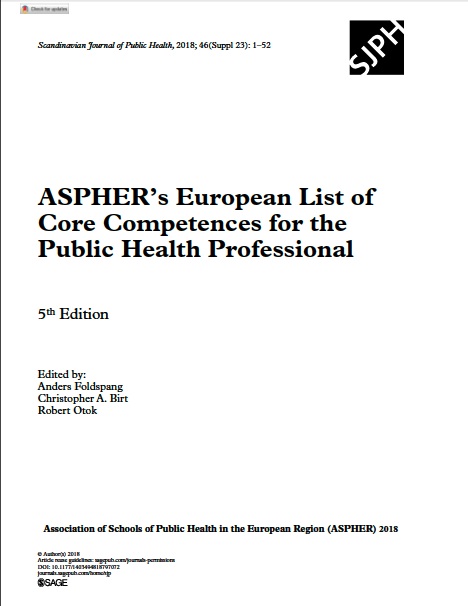 Population health and health systems change, as do public health practice, theory, terminology and scientific research methods. Thus, a list of public health competences needs to be developed continuously. This 5th Edition of ASPHER’s European List of Core Competences for the Public Health Professional has been based on the preceding editions (4,5) by involving a number of international advisory experts – experts within some of the main themes of public health, namely, epidemiology and biostatistics; sociology; environmental health; health economics; leadership and systems thinking; public health nutrition; communicable disease prevention and control. All contributions have been formatted in balance with the full list, with the exception of the sub-discipline of communicable disease prevention and control, which has been additionally represented by an extract of the list of competences developed by the European Centre for Disease Control (ECDC), Stockholm.