Publication date: 29.10.2020
Author: Board of Directors of the Italian Postgraduate Schools of Hygiene and Public Health

TIPH Campaign from the Northern Italy Schools of Public Health 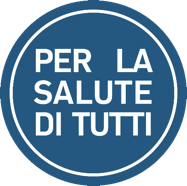 The preliminary phase of the TIPH Campaign was dedicated to the project setup and was conducted by the Public Health Residents of the Vita-Salute “San Raffaele” University, with the coordination and supervision of the PI and the Schools’ Directors. The working group extensively discussed the need for an appropriate translation of the TIPH logo in Italian. The word “health” has a double meaning in Italian (“salute” and “sanità”); furthermore, people with limited English proficiency are a large part of the target population. Finally the team settled on a non-literal translation of Per la salute di tutti.

Aim of the TIPH Campaign and Launch Events 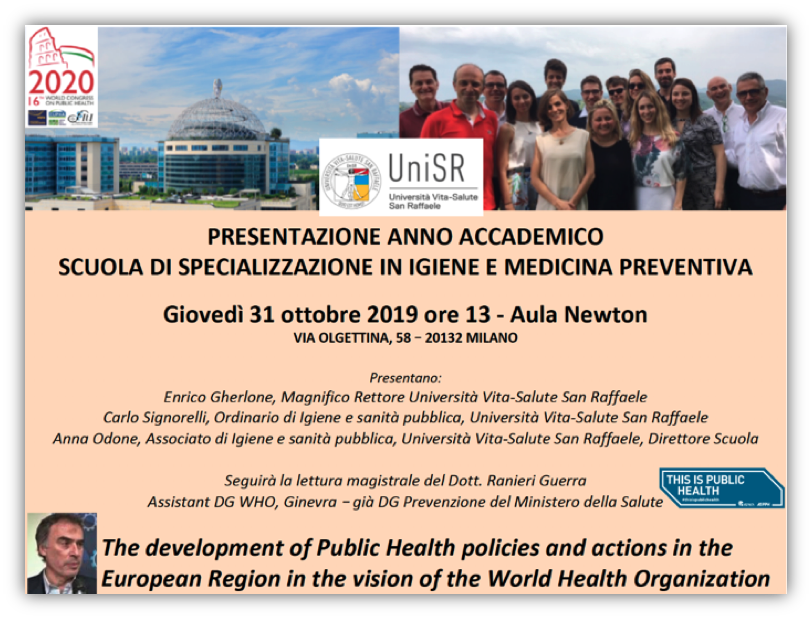 Figure. Promotional material for the Grand Lecture of Dr. Guerra, that launched the Italian This Is Public Health campaign

The Italian TIPH Campaign was launched in the context of an official event with participation from all the Schools of Public Health of Milan and Regional Health Authorities. We opened the TIPH Campaign with a Grand Lecture from Dr. Ranieri Guerra, Assistant DG WHO Geneva, on the theme: “The development of Public Health policies and actions in the European Region in the vision of the World Health Organization”. The lecture was presented at the inauguration of the Academic Year of the School of Public Health of Università Vita Salute San Raffaele with the Residents, the Faculty and the Partners of the Campaign from Politecnico di Milano in attendance.

Health in All Policies represents an approach to rules and regulations, and its application is increasing in the field of Public Health. We designed a Health in All Policies, Sustainable Development Goals-centered analysis of the legislation of two Regions in Northern Italy: Lombardy and Emilia Romagna. Two teams carried out separate analyses of laws retrieved from the official websites of the two Regional Councils. First, we excluded all healthcare-related laws from the analysis, then we labeled each law with the most representatives SDG engaged.

Figure. Results of the analysis Health in All Policies 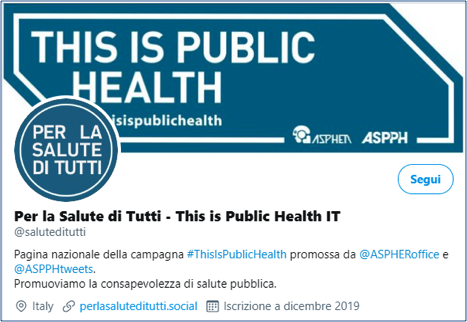 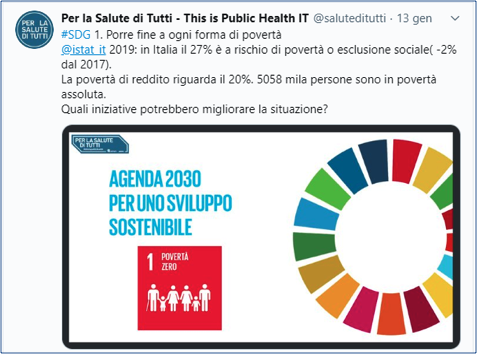 Figures. The Italian Twitter page of the This Is Public Health Campaign

The TIPH Campaign set up a social media team self-managed by the Residents of Università Vita Salute San Raffaele, and the collaboration of the partners of the Campaign, to increase public health awareness among the population and improve the Campaign’s visibility. The platforms used were Facebook, Twitter and Instagram.

The publication plan consisted of sharing weekly posts tackling individual SGDs, explaining its relevance, sharing data on the Italian situation in that context, and proposing examples of steps taken by the Italian Government to address the issue. In the example you can see the post that was shared for SDG 1 End poverty, with data regarding poverty in Italy. 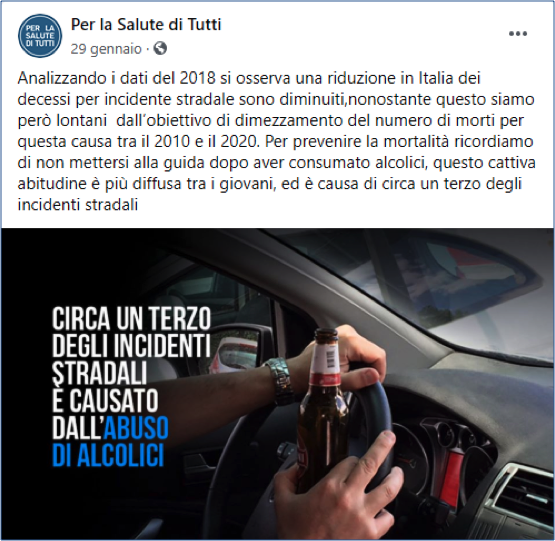 A Facebook page was created with the intent of sharing posts to raise awareness on public health emergency issues. For example depicted in the figure, our post on alcohol abuse and drunk driving.

The TIPH Campaign participants were often featured in person to promote relevant campaigns, for example the figure shows the Professors of the School of Public Health of Università Vita Salute San Raffaele receiving the influenza vaccine from a Resident in our This Is Public Health frame. Most importantly, the TIPH Campaign was employed to increase visibility of important public health interventions taken in our Region. In the example, the inauguration of a new helipad for health and fire emergencies. 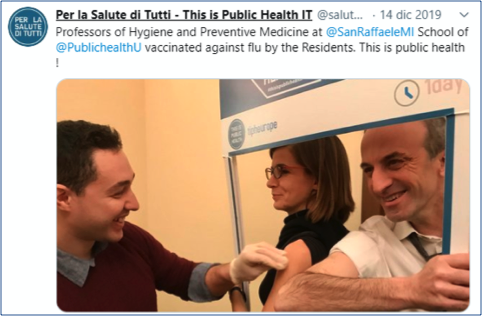 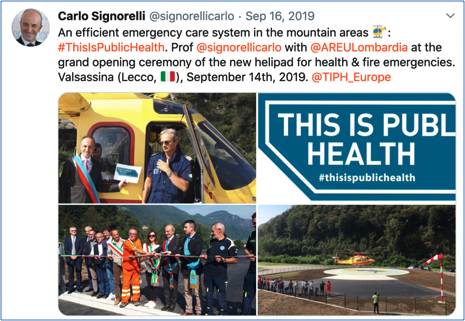 Figures. The Università Vita Salute San Raffaele Professors receiving the flu vaccination from a Public Health Resident. The This Is Public Health Campaign to increase visibility of the inauguration of new helipad for health and fire emergencies

Aside from social media, the Team promoted the TIPH Campaign and its objectives in the scientific community. The TIPH Campaign was presented by Dr. Roberto Croci at the National Conference “Giornale della ricerca scientifica e delle esperienze professionali dei giovani” held by SITI, the Italian society of Hygiene and Public Health in Rome. In addition, an article was published on the rationale of the TIPH Campaign and its early activities. In the near future, the results of the Health In all Policies initiative will be presented at the 16th World Congress on Public Health (Poster Display: DE.20 - Tackling Sustainable Development Goals in Italian Regional Legislation: a Health in All Policies comparative analysis. Giuseppe Stirparo).

The TIPH Campaign was not only aimed at the community, but it also had application in the Hospitals that are internship sites for the Residents involved in the Italian TIPH Campaign. The Residents of the University of Parma designed 5 posters to raise awareness on Public Health issues in the Hospitals. In particular the issues tackled were: antimicrobial resistance, tobacco smoke, bed falls, hand hygiene and the ban to admit pets in hospitals.

At the same time, Residents of Università Vita-Salute San Raffaele designed a campaign against smoking inside and around the San Raffaele Hospital, and to encourage recycling in the hospital and the university. 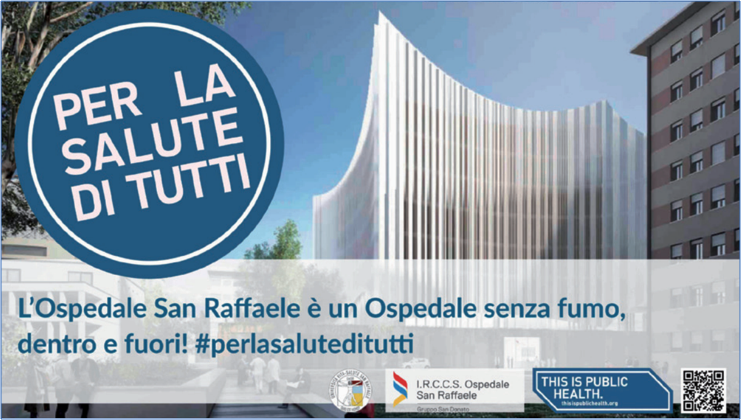 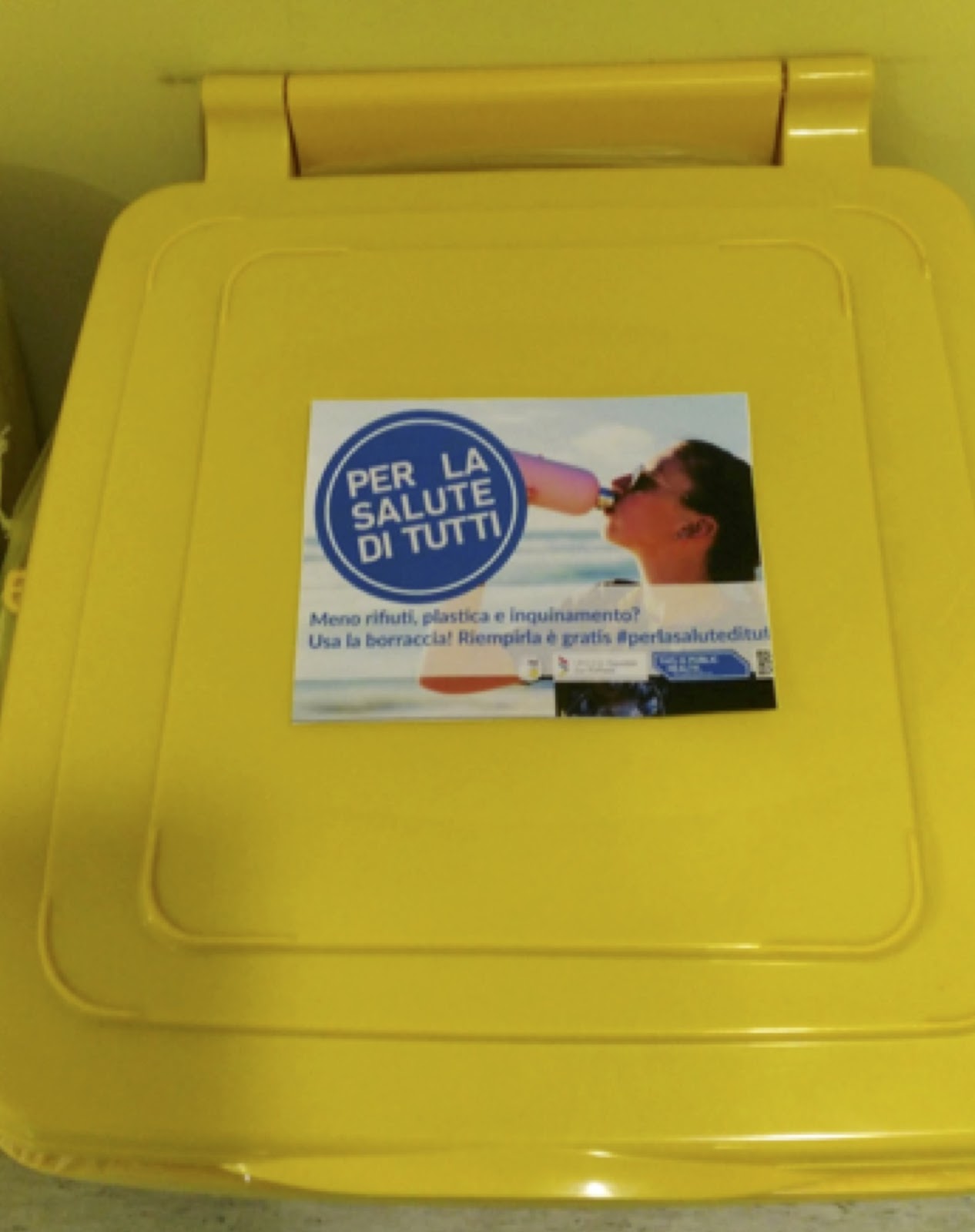 The Role of Public Health Residents during the Coronavirus Emergency

Despite what we had planned for the future of the TIPH Campaign, our Lombardy region was the first European Region to face the COVID-19 emergency. For this reason, the Italian TIPH Campaign had to adjust its focus and become much more operational.

The Residents involved in the TIPH Campaign quickly became active in the production, evaluation, interpretation and implementation of guidelines in hospital and community healthcare settings. In particular they were involved in the reallocation and creation of COVID-19 beds in specific wards and reorganization of emergency rooms. Many Residents played a role in the local Public Health Services, performing extensive contact-tracing activity. In Phase 2 of the COVID-19 emergency in Italy, Residents were in the first lines for the reconversion of COVID-19 wards to COVID-19-free wards in hospitals. 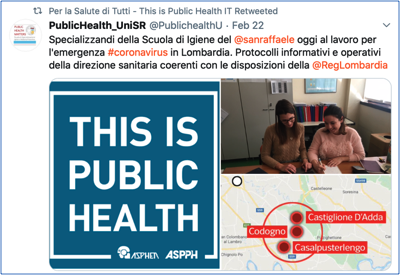 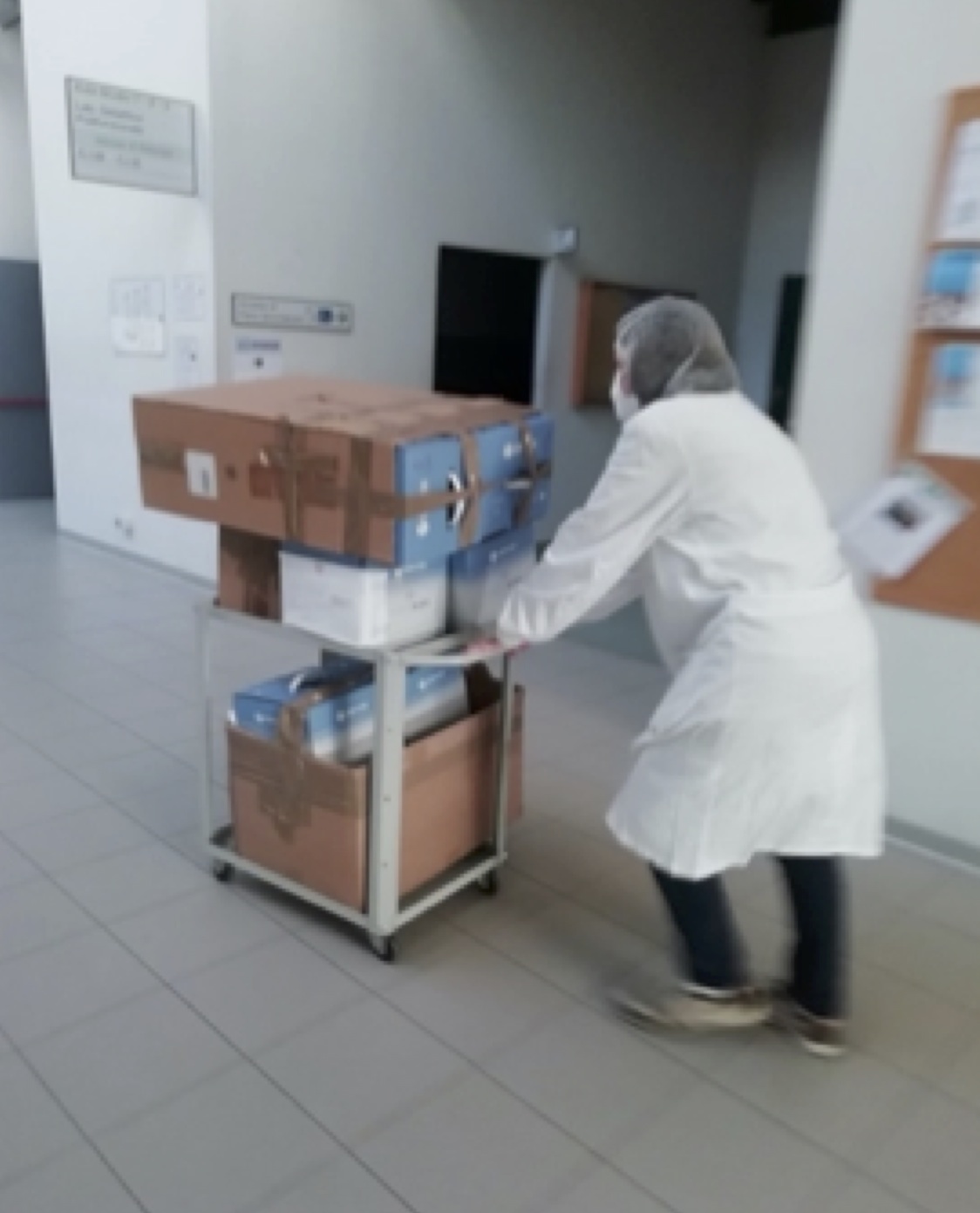 Figures. Residents of San Raffaele hospital at work for the implementation of new guidelines during the COVID-19 emergency, The COVID-19 referral laboratory in Parma 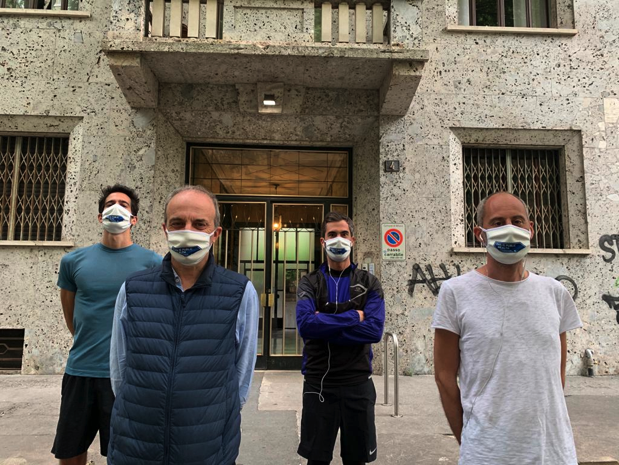 Remarkably, the University of Parma was in charge of the Coronavirus referral laboratory in Parma, where the Public Health Residents helped to process and analyze  more that 16,500 nasopharyngeal swabs in the first three months.

As the COVID-19 emergency was reaching its peak in Italy and wearing masks was deemed compulsory, we saw an opportunity to increase awareness of the TIPH Campaign. We organized the production and distribution of  community masks featuring the This Is Public Health logo.

Figure. Community masks with the This Is Public Health campaign logo 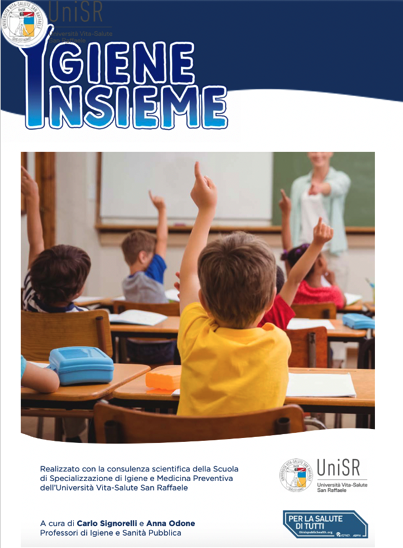 Figure. Educational pamphlet of school age children on preventive measures against the diffusion of the virus

As the community in lockdown was in need of information, the TIPH Team designed educational campaigns to shine a light on the preventive behaviours necessary to counteract the diffusion of the virus. The Professors of Public Health at the Università Vita Salute San Raffaele curated an educational pamphlet to teach simple hygiene measures to prevent contagion in schools. In addition, a cartoon was designed, produced and broadcasted on national TV, in collaboration with SITI, EUPHA and ASPHER. The cartoon called “Leo and Giulia” (Italian version, English version) answered the most difficult questions of school age children on the virus, its contagion and life during the pandemic. 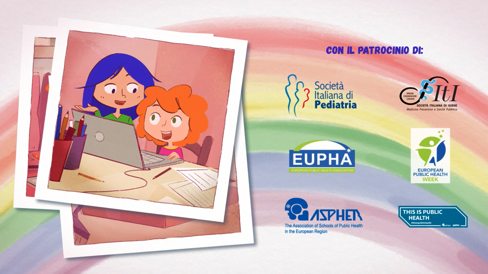 Figure. Photogram of the educational cartoon “Leo and Giulia”

Not to forget, “How to count illness”, a COVID-19 eidemiology booklet that stemmed from the ASPHER collaboration curated by Residents of Università Vita Salute San Raffaele, under the supervision of Professor Carlo Signorelli, and translated into 10 languages.

The University of Bologna TIPH Campaign: Impact of the Environment on Health 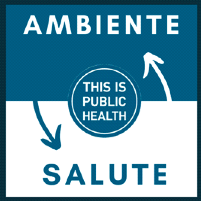 The School of Public Health of Alma Mater Studiorum University of Bologna, directed by Professor Maria Pia Fantini, took on the environment branch of the TIPH Campaign, and decided to change the project name from “Environmental and Sustainability” to “Salute è Ambiente, Ambiente è Salute” in order to be more understandable and appealing in the Italian language.

The project aim was to raise awareness among students of the healthcare field (i.e. Medicine and Surgery, Healthcare degrees such as nursing, Environmental Engineering, Architecture) about the impact of the environment on people’s health. The project was included within the “Multicampus Sostenibile” programme of the University of Bologna, which is a multi-action strategic programme to try to mitigate the environmental impact of the University of Bologna communities and campuses.

The preliminary phase consisted of consultations with experts in the field to set up the TIPH Campaign activities, in particular the Social Media Desk contact person and AlmaEngage Social Media Manager to better define the social media awareness campaign strategy and the Prevost for International Affairs and Department for Internationalization affairs) to discuss about the assessment strategies, among others.

Twitter and Instagram accounts were dedicated to the Project (“This is Public Health Bologna – Salute è Ambiente, Ambiente è Salute”); in addition the already existing “Igiene e Medicina Preventiva – Università di Bologna” Facebook Page was used in order to promote the TIPH Campaign and activities. A series of articles were published in the University of Bologna (UniBo) Online Magazine and shared on the four different UniBo social media accounts (Facebook, Instagram, Twitter, Linkedin), in the This is Public Health kick off meeting and the Journal Club addressing Millennials’ health.

As a highlight, on the social media channels three "Ecological tips for the Winter Holidays" were published, in order to raise awareness of more sustainable behaviors during the holidays: on food waste, house heating and the environmental impact of the unbridled race for sales shopping. 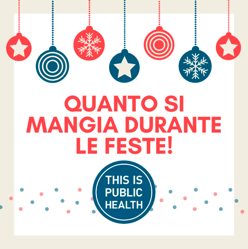 Figure. Example of a TIPH holiday post in the social media campaign

The TIPH Campaign was interviewed on Radio Città del Capo, Bologna radio station, to share the project activities and specific questions regarding the scheduled event on Millennials’ health.

In the context of “Nastro Verde”, the festival of sustainable cinema organized by UNIBO, two films were selected for the TIPH Campaign: "Contagion" directed by Steven Soderbergh, preceded by a speech from Prof. Maria Pia Fantini “SARS-CoV-2/COVID-19 ways of contagion and prevention measures. Let’s make the state of the art on the most recent knowledges” and "Un posto sicuro" directed by Francesco Ghiaccio, preceded by a speech from Prof. Stefano Nava, entitled: “Respiratory diseases: not only infectious agents but also driven by environmental pollutants”. 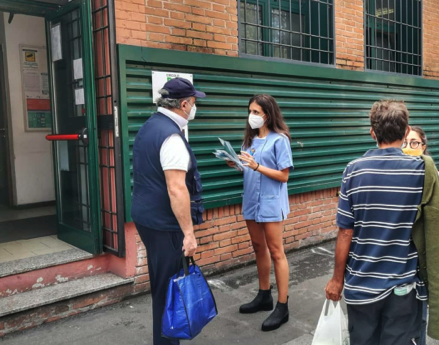 In the context of the COVID-19 emergency, educational material about the main prevention strategies for the community were prepared and shared, with instructions about the use of different types of masks and correct hand hygiene procedure. The flyers were translated in four languages and handed out to homeless shelters, public kitchens and even directly to people with no fixed abode. The material was provided together with a package of alcoholic sanitizer solution and some surgical masks. Moreover, the volunteers made efforts to identify the health needs of people, providing information about access to healthcare services.