Where is Europe going in its pandemic response? 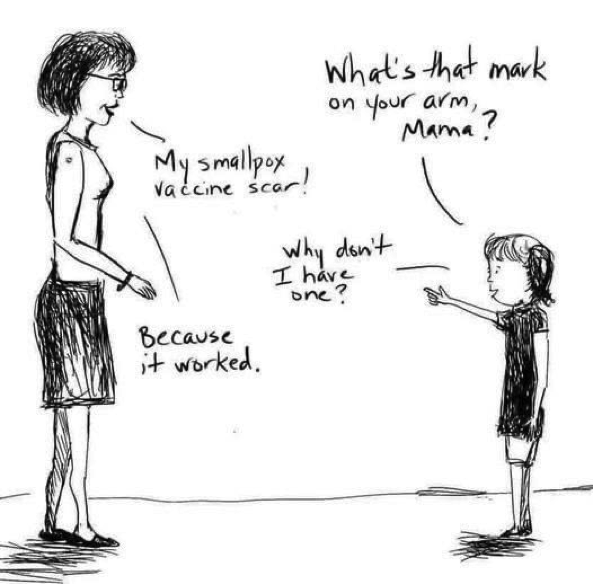 We should begin by celebrating the extraordinary impact and power of vaccination. It is one of the iconic interventions of public health. It works. The COVID-19 vaccination race has been a spectacular hi-tech multinational effort, at great but orderly pace and it is paying off – the vaccination programmes of Israel, UK, Spain and USA are demonstrating great promise and potential – death rates in vaccinated groups are down considerably. Figure 1 and 2 are examplesfrom USA and Israel.

The United Arab Emirates has had major success in its vaccination programme. Malta and Gibraltar are also exemplars of good practice in vaccinating against COVID-19. (Figure 3) 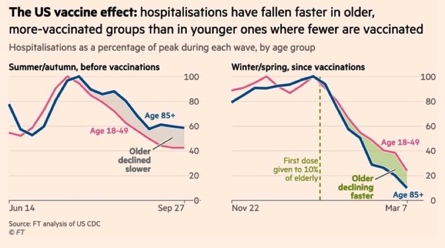 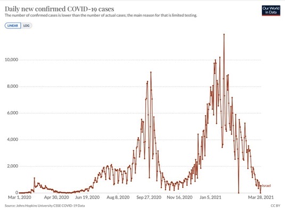 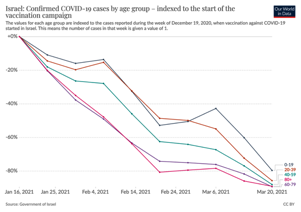 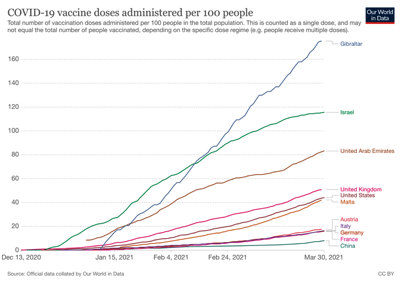 Yet set against this, we have the spectre of new variants arising everywhere, grotesque inequality in access to vaccines, and European political leaders intent on plucking defeat from the jaws of victory. And no, Prime Minister Johnson, the success of COVID vaccination is not a triumph of capitalism and greed.

The pandemic continues to wreak havoc across Europe. We have seen terrible impacts in Portugal, UK and Ireland, apparently following Christmas relaxations. France has reimposed lockdowns. In Germany, Chancellor Merkel has apologised to the nation for a proposal to shut down the country for five days of Easter, although rates of COVID have surged again, and roll out of vaccination is described as ‘glacial’. Belgium is imposing lockdown for Easter as rates have risen again. Austria is in lockdown. Czechia has been experiencing a major disaster, with severe illness and deaths overwhelming its health systems. Hungary has now shot up the infections and deaths league tables. Estonia and Montenegro have come from low down to feature prominently.

The United Kingdom hasn’t come out of lockdown, but is continuing on its ‘roadmap’ to freedom. Ostensibly a planned route, based on ‘data not dates’. Rates of infection have levelled or increased and stand at 2000 a day more than during the first lockdown. It is still a rocky, uneven and a dangerous road, with all schools opening at the same time a major hazard. Deaths and hospital admissions are down through a combination of lockdown and vaccines.

Lithuania too saw a major spike now reducing. Ramune Kalediene, Head of the Department of Health Management at Lithuanian University of Health Sciences, joined our task force meeting to discuss their experience on March 18th. She is advising national ministers on action needed, and it seems to be paying off. In Lithuania, however, as for many parts of Europe there is now extensive and dangerous vaccine hesitancy. This has been fuelled disastrously by the wholly avoidable political vaccine wars against the AstraZeneca vaccine. European politicians have been chaotic and sluggish in implementing vaccination programmes and they have failed to use and follow the science. They have contributed to worsening levels of vaccine resistance around Europe. This has been the worst example of ignorant and negligent vaccine nationalism we have seen so far and will cost lives and prolong the pandemic. ASPHER has welcomed the European Medicines Agency decision on the AstraZeneca vaccine.

There were hints of the problem ahead, in disputes over vaccine supply, in our BMJ opinion piece in January. We have also expressed our concerns over vaccine passports – if implemented now they are likely to cause more resistance. Thanks to Giulia Sesa for leading that statement. If passports are an inevitability, then they need to be done well, protect privacy, be secure from fraud, reduce inequalities and reinforce confidence in vaccines. We are not there yet.

The potential for us all to have passports relating to vaccines that don’t work is a major concern shared by the WHO. It is essential we try to anticipate new variants and vaccine resistance and work cooperatively across nations to address this. We should all be concerned about the movement of COVID into younger age groups as is being witnessed in Brazil, in Italy and Israel.

The ASPHER COVID-19 task force is documenting the situation weekly and I commend these reports to you – new ones published on Fridays. My thanks go to Pallavi Chatarajupalli and Ralf Reintjes of HAW Hamburg for putting this together for us.

The world has now been locked in pandemic for over a year. The death toll stands at 2.8 million. Western nations have done very badly. There will need to be a reckoning – in all countries. Early in the pandemic there was talk in the United Kingdom of the ‘corporate manslaughter’ unlawful killing in the neglectful exercise of public authority. That concern is now being called ‘social murder’. Prime Minister Johnson says he ‘made mistakes’, but he will not admit these on the scale they have now been documented.  For other countries too there are clear political failures which have rendered public health responses inadequate. ASPHER has documented the failures of governments in our statement on the erosion of public health. At the same time, we have celebrated the actions and achievements of our schools during the pandemic.

I think my three faces of COVID analysis broadly holds true. There were countries which were well prepared and decisive from the start which have continued to suppress the virus – particularly in Asia-Pacific and Australasia, but also Finland and Norway; there were those who did well in the first phase through following the WHO advice, this included some of our European colleagues like Czechia, Slovenia which then took their eye off the ball; and there are those who have done badly throughout – the UK, USA, Brazil, you choose the rest… And in contrast, we can celebrate the extraordinary success of community responses like that in the Dharavi slum in Mumbai. This for me shows what is possible – without modellers, without sophisticated science, with just basic public health knowledge and a community willing to recognise a problem and respond to it collectively, and support each other during their enforced isolation.

It is clear we are nowhere near out of this pandemic yet. The current mantra is worth restating –­ ‘we will not be safe until everyone is safe’. We need to commit far more strongly to a global approach to tackling a global problem. This century can be the century of pandemics. We are observing swine flu in Poland, and avian flu in Russia. As a species we are invading and destroying more natural habitats, bringing us more closely in contact with the microbes and parasites which might find us tasty and make ‘the jump’ to humans. Our insatiable lust for land, air travel, conflict, consumer goods, foods and addictions all stack up to making pandemics more likely. Our obesity levels, our pandemic non-communicable diseases and our unequal societies make it more likely those pandemics will be destructive. 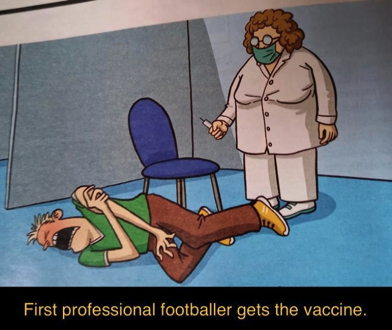 So it is encouraging that our leaders seem at least to be expressing a desire to learn the lessons of the pandemic and see in a new treaty for better international preparedness and response in the future. On March 30th 2021, world leaders pledged to strengthen international responsiveness to pandemics through a new global treaty. The European Union has set out plans to strengthen its capabilities through a Health Emergency Responsiveness Agency. We now need to see the concrete actions that will be required if we are to turn this vision into reality. ASPHER stands ready to support our leaders in learning and acting on the lessons of the pandemic.

On a lighter note…the World Cup qualifiers are on!